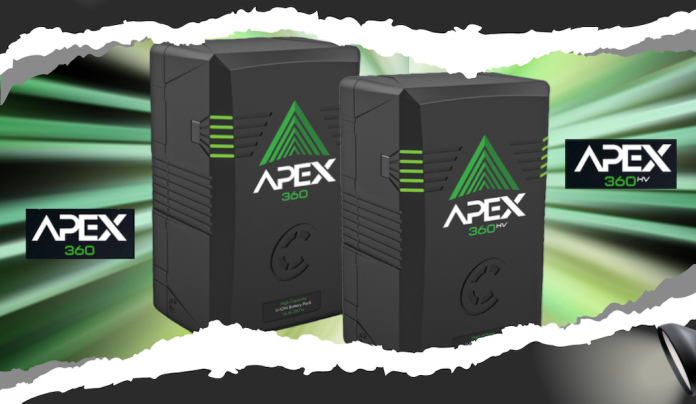 Designed to power your high-voltage LED lighting on set or in the studio, the Core SWX APEX 360 Batteries, Power Adapters, and Chargers mount high-capacity lithium-ion batteries directly on your lighting configuration to power them for hours on end. Optimise your shoot times and keep your compatible lights running for longer with the APEX 360 power series.

Two battery packs make up the APEX 360 launch and both are lithium-ion with a 367Wh capacity. Where they differ are their voltage outputs and V-mount sizes. One features a standard V-mount connection and outputs 14.8V to your light of choice, while the other features a Helix-compatible V-mount for use with Core SWX Helix system pins and outputs 29.6V. Rugged exteriors on each battery sport LED indicators visible on either side of the pack for increased visibility of your power status.

Once you’ve exhausted your battery packs, don’t worry – two rapid chargers can get you up and running in no time. Both chargers can fully revive a single battery pack in about five hours or two packs simultaneously in less than ten hours. Bundles of batteries and chargers outfit you with different combinations – like two V-mount batteries and a charger – and keep your production going. Other bundles include Direct-Connect Plates, which exchange V-mount plates on lights such as the Aputure LS 600d Daylight LED for plates that support the APEX 360 or Helix series high-voltage battery packs.

Speaking of expanding your compatibility, additional adapters included in the release allow you to use the APEX batteries with different mounts and lights. Change your V-mount battery to a Gold mount battery with the V-Mount Battery Adapter for Gold Mount Equipment. The adapter can also be used as a charge adapter, as well, to allow the APEX V-mount battery to be charged via a Gold mount charger. To use your standard V-mount APEX battery with other lights, there’s a Battery Riser Adapter. This helps raise the V-mount connection for compatibility avoiding any mechanical interference.

The APEX 360 battery packs are capable of powering select Aputure and Nanlite LED lights at varying brightness levels and at full and half power for periods of time ranging from two to six hours. The chart below demonstrates the performance of two battery packs with the Aputure 300D Mark II, Aputure LS 600D, Aputure Nova P300c, and the Nanlite Forza 300 with compatible adapter at different brightness increments and modes.