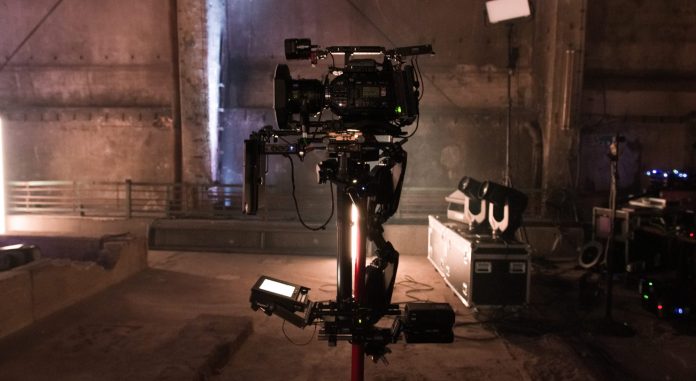 Blackmagic Design has recently announced that a new comedy show created to launch the Sky Comedy channel in Germany was delivered with a Blackmagic RAW workflow, incorporating acquisition with the URSA Mini Pro 12K and post produced in DaVinci Resolve Studio.

Eine kurze Geschichte des Humors (A Brief History of Humor) is presented over three parts by leading German comedian Dieter Nuhr. The show explores humour through the ages, with the main segments captured in 12K resolution with additional interviews and B roll shot on the Blackmagic Pocket Cinema Camera 6K.

The production team decided on a 12K acquisition workflow to provide greater pixel information for any VFX inserts and allow room for reframing and cropping in the edit for a final 4K delivery.

Marius Fischer, who led post production for the show, explains further, “I had the idea that we could build the series in post production, as 12K would allow for such a large canvas to zoom into without losing any detail. It also meant a faster way to complete the program, which was already on a condensed schedule.

“We shot in 12K 16:9 Blackmagic RAW and when we built a digital zoom for the first time with the 12K footage, the producer, director and I were all surprised and excited.”

The URSA Mini Pro 12K was rigged on a Steadicam and paired with Zeiss Supreme lenses for extra detail and character. Marius explains how a particular focal length helped the shoot, “We mostly shot on a Zeiss Supreme Prime 21mm, only switching to 35mm once. As we were going to crop and decide on framing in post, we selected a wide angle. Also, social distancing influenced our choices, as constantly swapping out lenses might not keep the crew and the host safely distanced.”

Filming took place in a disused power station in Berlin over two days, with 15 days of post production. Editing, compositing and colour grading were completed with DaVinci Resolve Studio.

Even with the considerable amount of data involved, Marius found working with 12K material a very smooth process. “I had instant playback on RAW clips, even during the grade. When I applied VFX in Fusion I had to set the render cache to ‘smart’ to help the processing.

“We were able to select the most appropriate format for Blackmagic RAW, which for us was set at 5:1 compression, so our pipeline didn’t feel at all hindered by the size of the data rate, which topped out at 390MB/s.”

Marius’ experience on Eine kurze Geschichte des Humors has led him to believe that 12K should be used more in broadcast. “Knowing that we had all that high quality footage reassured us that the show’s detail and personality could be shaped and crafted in post. It also helped the production team on set, who could concentrate on getting as much content as possible, despite the tight turnaround and working within Covid guidelines.”