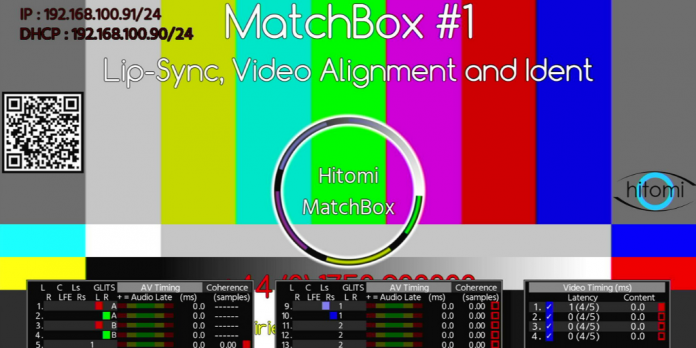 Hitomi Broadcast’s MatchBox now measures the delay between an event happening in real life and seeing it in picture – latency. Taken either from the front of multiple cameras or at various points through the broadcast chain, readings are displayed in real time with milli-second accuracy. MatchBox Latency further strengthens Hitomi’s applications for remote and virtual productions.

Typically, live broadcast workflows add delay which can vary each time. Different paths need to be synchronised for a seamless viewer experience. For example, in golf coverage graphics that show the trajectory of the ball can take up to a second to generate. If this latency is overcompensated for, you see the flight of the ball before the golfer hits it. The same principle applies when cutting between cameras with different delays, including drones, wired, shoulder-held etc.

Latency can creep up if left unmeasured. The causes of extra latency can frequently be accidental. For example, inherited settings from the last event or pieces of equipment in the chain not actually required. Low latency is essential in order to keep a broadcast ‘truly live’ – how annoying would it be to receive a text from a friend at the game about the goal which hasn’t been seen yet on television?

Live interviews between studio presenters and a remote correspondent require low latency links for a true two-way interactive conversation – audiences dislike long pauses waiting for replies. MatchBox Latency can measure the speed of links in order to ascertain if faster ones are necessary.

Determining offsets theoretically can take up a lot of engineering time; with MatchBox it takes just a matter of seconds. Hitomi’s system is fast, easy to use and accurate, simplifying the task of measuring latency and delivering a lip-sync reading as well.

MatchBox is a two-part solution. A timed test pattern is launched as the source with a bespoke analyser receiving and decoding it at the destination resulting in the timing measurement. This method can be thought of as a multi-meter for signal timing with a probe at each end of the section of interest.

The test pattern can originate from either MatchBox Generator or using an iOS device held in front of the camera running our free Hitomi Glass app. A licence is required to decode the latency signal but not to send it. Existing users can simply upgrade their Generator software for free to create the timed signal. This added functionality is invaluable in multivenue events across several geographic locations, where multiple broadcasters must work together.

Hitomi’s Broadcast Director, Russell Johnson, said, “The customers I have visited using latency have found it to be a game changer. Their workflow is now to check that the latency is what they were expecting first then follow it by measuring lip-sync. This is because if video latency is longer than expected then the lip-sync will be out. Audio arriving early is most disconcerting to viewers as in real life we rarely hear things before we see them.

“The need for “low latency” is much talked about, but rarely quantified,” Johnson continued. “With MatchBox it can be. As the system is already deployed worldwide with major name broadcasters, widespread adoption of this new technology can be rapid.”

This product is designed to help broadcasters prepare for live transmissions as well as virtual studios and other applications where timing needs to be known, not guessed. It can form part of a remote production toolset helping broadcasters move to more eco-friendly workflows whilst still retaining quality. See Hitomi Broadcast on stand 10.A42 at IBC 2022.