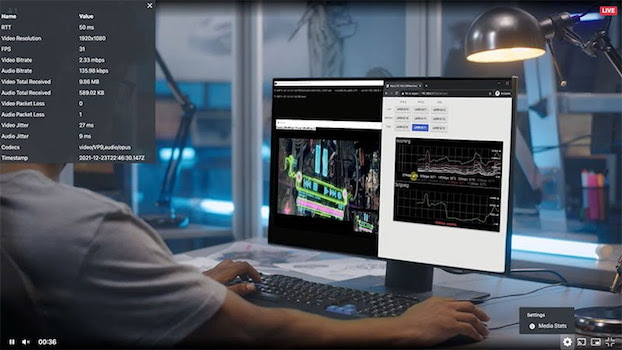 Millicast launched the new version of its hosted Broadcaster and Viewer in production, built on its very own Javascript SDK. The new broadcaster includes support for streaming Simulcast (in Chrome), as does our version of OBS Studio, and the new viewer supports Simulcast in-browser to enable ‘ABR-like’ playback.

The new viewer supports Millicast’s Interactivity API that enables you to add Multisource switching within the player, as well as Audio Multiplexing give the user the ability to switch between multiple language tracks in real-time.

Millicast is adding new features to view stream health and help diagnose potential issues at the first (broadcast) and last (playback) mile. Media statistics can be viewed in the player, and ‘Start Video Test’ as a video source for testing a stream. Millicast has also included support for Screen Sharing, Chrome cast support, Viewer count, and adding a poster image to a stream that is not live.

Finally, the Millicast Dashboard updates include features only previously available in the API, including the ability to delete multiple (or all) recordings within the Archives, per stream Analytics, Webhooks, and Geoblocking by Stream or Account.

The Flowcaster team has added support for WHIP which now enables optimised workflows for post-production professionals that want to stream the highest quality media at the fastest speeds across the globe. Flowcaster has native support for 10-bit HDR capture in-software with Adobe/Avid products and from SDI/HDMI capture with AJA capture cards, a feature we hope to support soon with Millicast.

WHIP continues to gain traction across the industry, with several technology partners actively working to integrate WHIP into their products.