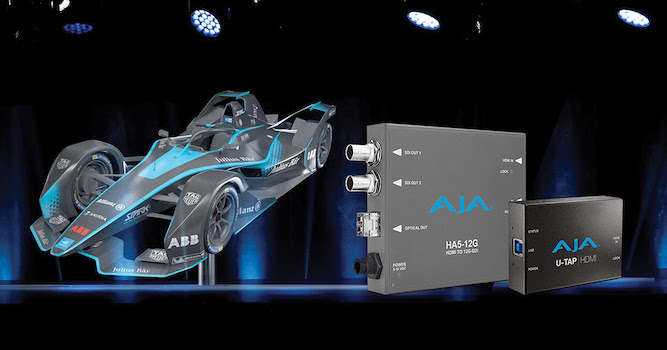 The Musion 3D patented portfolio of next-generation technologies includes a telepresence holographic conferencing solution, developed to deliver life-sized 3D experiences in real-time. In gearing up for Vodafone Romania’s 5G launch in 2021, Musion 3D was tapped to create and deliver the first live telepresence hologram in 4K. The launch event was hosted on Mother’s Day and featured live 4K holographic figures of everyday moms, celebrating their love and achievements. Event footage was captured and later edited for use in commercial advertisements. This was the first holographic installation that Musion 3D produced in 4K and filmed in an outdoor environment, presenting a host of challenges that required the reliability and performance of AJA 12G-SDI and fibre-equipped conversion solutions to pull off the event without a hitch.

Event setup required that holographic images be transmitted over long distances between two separate locations, necessitating conversion from coax cable to fibre to maintain an uncompromised video signal. To ensure the video resolution was consistent throughout transmission and convert the live 4K SDI signals to fibre, Musion 3D relied upon AJA’s versatile and compact lineup of Hi5 and HA5 12G-SDI-enabled Mini-Converters, allowing the team to share high-bandwidth signals over longer distances with a single cable and zero downtime. A longtime user of AJA gear, Director Ian O’Connell shared, “AJA converters are incredibly powerful and easy to work with. They interconnect like LEGO pieces, allowing you to build the exact infrastructure customised to meet the requirements of any job.”

Depending upon the installation or project requirements, The Musion 3D holographic workflows include an arsenal of AJA conversion, recording, and I/O solutions to aid in the delivery of high-fidelity audio and imagery. Minimising audio distortion is achieved with a range of AJA audio embedders and disembedders for echo cancellation, while AJA’s UDC up/down/cross-converter helps the team effortlessly manage resolution conversions to maintain consistent raster sizes throughout project workflows. To capture holographic content, Musion relies upon AJA’s production-proven lineup of Ki Pro digital recorders during the filming of live events, while depending upon AJA’s U-TAP HDMI and U-TAP SDI USB 3.0 bus-powered capture devices for live streaming. “Compared to standard IT and AV installations, we use AJA tools in a nonconventional way, and are often first to market in developing new AV technology applications,” added O’Connell.

O’Connell concluded, “As the technology continues to advance, live holograms and holographic broadcasts will become a part of everyday life, not only in corporate and entertainment spaces, but in the home and for communicating with remote family and friends. We will continue to be on the cutting edge of developing new imaging solutions, with trusted AJA gear to help push the needle forward.”