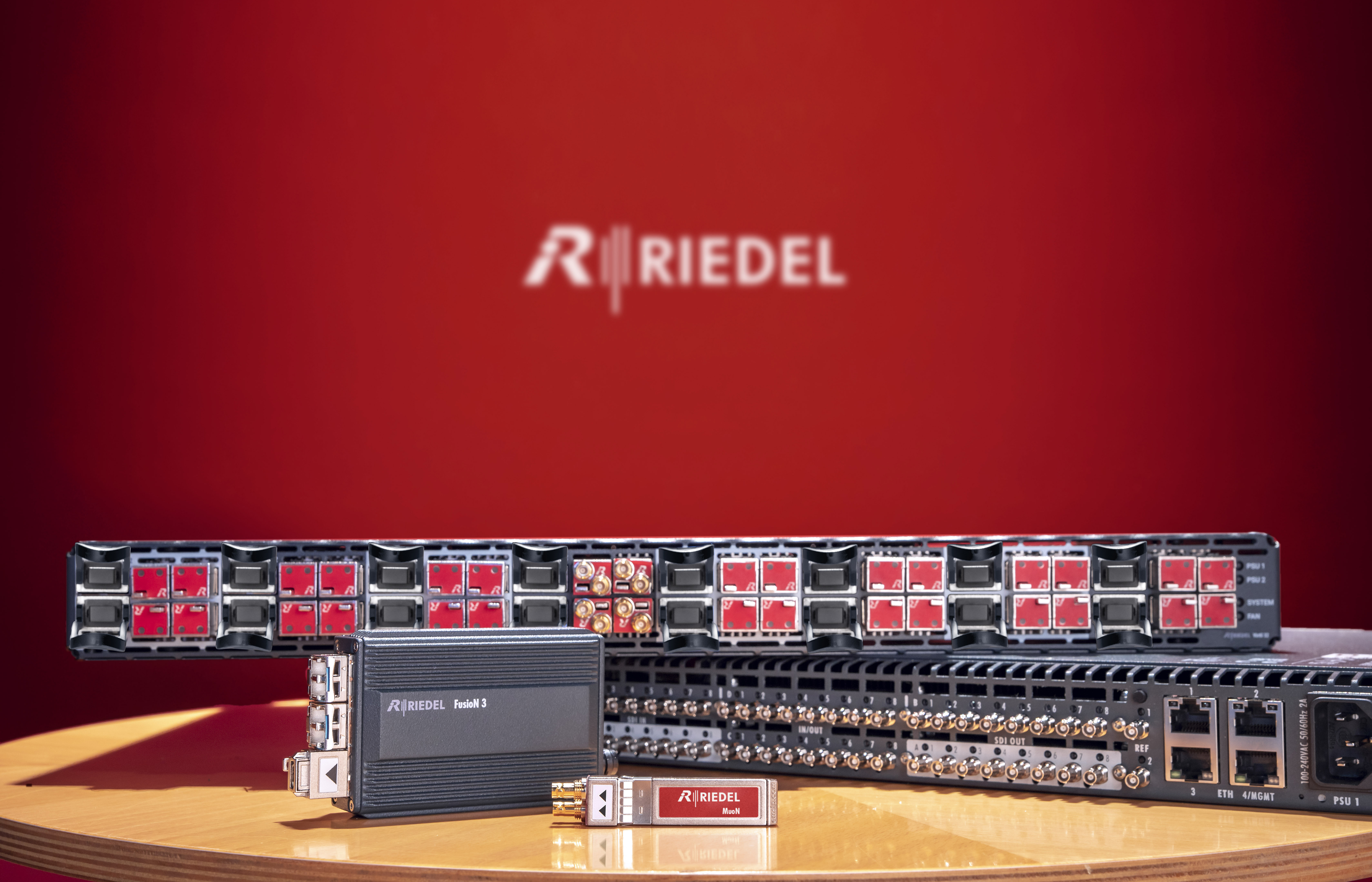 Riedel Communications has announced a significant expansion of the company’s MediorNet family of video networking devices. With 13 new hardware devices and nine new software apps, the MediorNet product line is better equipped than ever to meet the distributed routing, processing, and multiviewing requirements of today’s SDI, IP, and hybrid production environments.

Close collaboration between product management and engineering teams from Riedel headquarters and Riedel Montreal, formerly known as Embrionix, also brought forth the MediorNet MuoN, VirtU, and FusioN product series. Based on innovative, ultra-dense SFP technologies, these new processing modules and processing hubs complement the intelligent MediorNet signal interfaces and core switches and round out the Riedel video portfolio with full-IP solutions.

“Since Embrionix joined the Riedel family late last year, we have worked relentlessly to integrate their powerful technologies into our video solutions portfolio. Months of hard work now culminate in this flexible and powerful range of products that is set to revolutionize signal distribution and processing in the broadcast and event markets,” said Thomas Riedel, Founder and CEO, Riedel Communications. “We are really proud of what we have achieved as a team, and we are happy to present our common vision for the future of video networks with the MuoN, VirtU, and FusioN series.”

At the very heart of the new MediorNet products lies the innovative MuoN SFP technology. MuoN SFPs are pluggable gateway and processing devices delivered in a uniquely compact form factor that can be used inside VirtU frames or commercial off-the-shelf IP switches. The software-defined MuoN hardware is available with a range of different input and output configurations, including BNC, fiber, or HDMI, and can be configured with a variety of different apps. A simple change of the software license turns the device into an up/down/cross-converter, a JPEG-2000/XS encoder or decoder, an audio router, or even a multiviewer.

Riedel’s portfolio of distributed video network devices is further enhanced by the VirtU and FusioN product series. Boasting the highest density in the market, the VirtU IP core infrastructure platform can host a large array of Riedel MuoN SFP processors in just 1 RU and can be used both as a bulk gateway and as a high-density processing unit. Similarly, FusioN is a series of compact, stand-alone I/O and processing devices that are configurable with a range of software apps. Due to their small form factor and low power consumption, the FusioN devices can be placed close to signal sources or destinations, creating powerful efficiencies in any production environment.

“These versatile new devices are united by two key qualities that have driven our philosophy for media infrastructures since the beginning: They‘re distributed, and they’re software-defined,” said Jan Eveleens, Director Business Development, Riedel Communications. “With these new solutions serving a wide range of different functions and applications, we now have a stronger roadmap into the IP world and an even more comprehensive migration strategy for customers.”

Alongside new software-defined hardware platforms, Riedel has also launched a range of brand-new apps for up/down/cross-conversion, encoding/decoding, audio routing, and multiviewing, as well as a series of IP gateway apps.

“The intense collaboration between the Montreal and Wuppertal teams has already created powerful synergies. Our teams and technologies really are a perfect fit — of which this superb product launch is a stunning testament,” said Renaud Lavoie, Managing Director, Riedel Montreal. “These new product lines underline Riedel’s claim to technological leadership and are sure to consolidate the company’s position as a global player in the video market.”