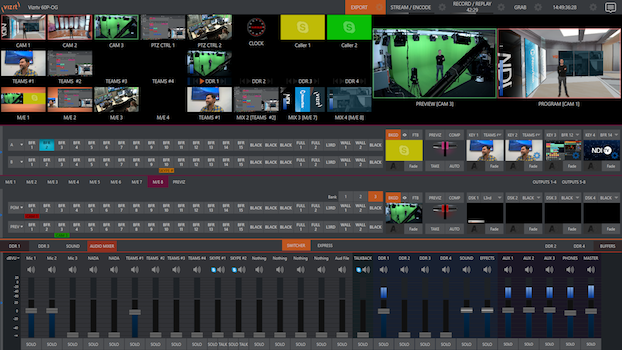 Vizrt has announced the release of Viz Vectar Plus 1.2, the latest update to the principal 4K software-based NDI-native switching solution.

Since its release in September 2020, Viz Vectar Plus has set a new standard for software-based live productions. Most recently the technology is powering innovative live productions in the cloud for Sky Sports Germany, Media.Monks, ATP Media, and a Premier League match for an IBC Accelerator project.

Gain more control and flexibility than ever before

NDI Genlock guarantees consistent timing between cameras and Live Call Connect enables users to bring in remote contributors from a wide range of communication applications, and operators can now send Alpha Channels through one of the MIX outs, bringing post-production closer to live.

Powerful built-in web streaming capabilities support a choice of connection types, resolutions, and providers, while simultaneous encoding an increased number of three channels in anything from HD to UHD is now possible for greater flexibility.

“In working closely with our customers, the necessity for enhanced audio features, better stream distribution, and the ability to use the latest NDI capabilities were revealed. Viz Vectar Plus has been fine-tuned to meet the demanding needs of cloud-based live productions now and in the future,” says Ulrich Voigt, VP Product Management for NDI, Live Production, and Cloud

As an NDI-native system, Viz Vectar Plus decomplicates the ability to create engaging content from anywhere by incorporating millions of audio and video sources. Mix-minus selection in Live Call Connect makes it even easier to integrate popular video communication applications as video inputs, while integration with NDI Remote turns any mobile device into a live production camera for unparalleled production flexibility.

With support for NDI Bridge, sources can be securely shared between local, remote or cloud sites, anywhere in the world. This addition allows live production teams to stay native in NDI, end-to-end, further reducing complexity, cost, and latency across any distance and with any applications.

Viz Vectar Plus video inputs now possess native support for the latest version of NDI|HX for better video and reduced latency while requiring far less bandwidth than is required for full NDI, enabling the use of broadcast-quality low-latency streams while maintaining visually lossless performance.

In the creation of the latest version of Viz Vectar Plus, Vizrt worked with Amazon Web Services to complete the AWS Foundational Technical Review which authenticates and guarantees the suitability of Vizrt’s Live Production Solution, with Viz Vectar Plus at its core for cloud-based deployments.

In addition to AWS, Viz Vectar Plus works with all major cloud providers and is available on our cost-effective Flexible Access subscription model and priced at just $1,960 US MSRP per month. To expand Viz Vectar Plus’ capabilities, there is the option to add on the latest iterations of Viz Trio and Viz Engine for superior graphics, alongside Viz Mosart for effortless studio automation.

“This update puts more power at the operator’s fingertips. Alpha Channel Outputs mean users can output the Matte & Fill of their graphic sources, macros have become more powerful with their ability to nest variables, and we’ve added the ability for LivePanel Builder to be customised in the user’s workspace, allowing Technical Directors to easily execute complex productions,” says Jon Raidel, Global Center of Excellence Lead for Live Production at Vizrt.