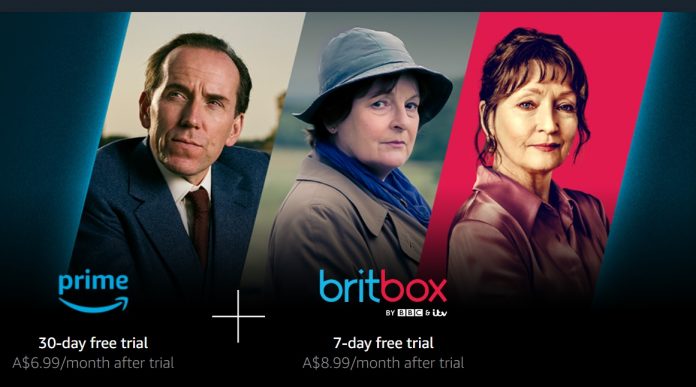 BritBox International and Prime Video have announced that Australians will have even more ways to watch the best in British television, with Prime members able to access BritBox via Prime Video Channels with an add-on subscription beginning today.

BritBox offers Prime Video subscribers in Australia the largest streaming collection of British drama and comedy with exclusive new shows such as ‘Karen Pirie’, ‘Magpie Murders’, upcoming series ‘A Spy Among Friends’ starring Damian Lewis and Guy Pearce, and much-loved favourites ‘Line of Duty’, ‘Doctor Who’, ‘Vera’ plus many more.

Prime subscribers will gain access to the add-on subscription on BritBox for an additional monthly fee of $8.99AUD, with a seven-day free trial and cancellation anytime.

Reemah Sakaan, CEO BritBox International, said: “This launch builds on our existing and successful North American partnership with Prime Video, and we are excited to be expanding our collaboration into Australia. It underlines BritBox International’s commitment to working with like-minded international partners, to bring the biggest and best British entertainment to audiences around the world.”

Prime Video Channels, which launched in November 2021, provides easy access to even more TV shows and movies customers love, all in one place, but also channels that bring popular. global content to their fingertips to enjoy anywhere, anytime in Australia. Australians will be able to access the BritBox channel on all compatible Prime Video devices; customers will be able to enjoy the same user experience and unlock thousands of new titles personalised to individual tastes, without the need to sign up to a bundle or contract.

Hushidar Kharas, Head of Prime Video Australia and New Zealand, said: “We are excited to bring even more selection to our Prime members in Australia with the launch of BritBox on Prime Video Channels. We are simplifying our customers’ entertainment experience, making it even easier for them to select, subscribe, and enjoy their favourite British television series in one place.”

Prime Video Channels is part of the growing list of benefits for Prime members in Australia, which include as fast as two days shipping on Prime-eligible orders, Amazon Music, Prime Reading, Prime Gaming exclusive deals, and more.