Can the Avengers Save the European Box Office? 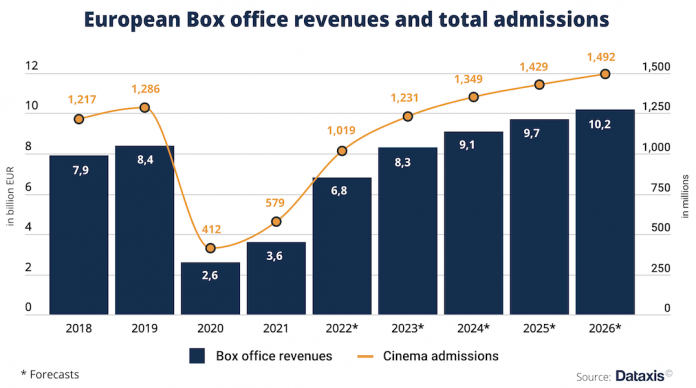 A first reaction would be to blame the pandemic. After all, theatres remained closed during the beginning of 2021 for most European countries to help flatten the curve, which inevitably impacted ticket sales and box office. When they reopened, cinemas imposed capacity restrictions as well as Covid passes. One of the side effects of such measures was that audiences got out of the habit of going to the cinema. But the problem might run deeper, as the pandemic seemingly accelerated an already-existing trend.

One of the reasons for those challenges faced by European countries is the competition for eyeballs with SVOD platforms, which blew up following the many lockdowns enforced by governments during the pandemic. In 2021, Europe had over 175 million SVOD subscribers. Major film studios took advantage of this challenge by launching their own SVOD platforms, like Disney+, Lionsgate’s Starz, and Warner Bros Discovery’s Discovery+. The future launch of the HBO Max platform in Europe, planned for 2022 and 2023, is likely to amplify this phenomenon.

The competition also impacted the audience’s sensitivity to movie ticket price increases. In 2021, the European movie ticket’s average cost added to €6.86, up from €5.73 in 2011, according to Dataxis (+20 percent in 10 years). Dataxis also forecasts that the trend is still upward as the average price for a movie ticket in Europe is expected to reach €7 in 2024. Meanwhile, most SVOD subscriptions in Europe cost between €5 to €15 and give access to thousands of movies, which is economically much more interesting for low income households and families.

Are movie theatres therefore doomed to disappear? It’s not time for the final curtain! With an excellent 2022 box office start, dark rooms have reasons to remain hopeful. If distributors, for reasons cited earlier, were nervous about releasing big titles right after lockdowns, it seems that 2022 is ready to break the curse, especially thanks to American blockbusters. Late 2021, Marvel’s Spider-Man: No Way Home’s impressive results were a good omen for what is to be released this year, such as Warner Bros’ biographical Elvis or popular action franchises’ sequels like Paramount’s Top Gun: Maverick, Universal’s Jurassic World Dominion and 20th Century’s Avatar 2: The Way of Water expected for winter 2022, 13 years after the franchise’s record-breaking first instalment. Regarding animation, there is no doubt that Pixar’s Lightyear and Illumination Mac Guff’s Minions: The Rise of Gru will be praised as technical and commercial successes. The European box office will also rely on strong local language releases, such as the French comedy Les Tuches 4, distributed by Pathé.

With rising numbers of Covid-19 infections expected this fall, the battle is far from over although ultimately movie theatres will have to learn to coexist and share the pie with SVOD platforms. For now, the cinema industry remains partly protected by the release windows system of films in Europe that prohibits films from being released in theatres and on platforms simultaneously, thus allowing theatre releases to remain exclusive physical events that create excitement and enthusiasm among the audiences. Moreover, Europe is historically a cinema-lover continent at its core, where people view going to the movies as a social and cultural experience. Coupled with the nascent SVOD-fatigue experienced by Europeans, theatres and their precise knowledge in curating have an ace up their sleeve.