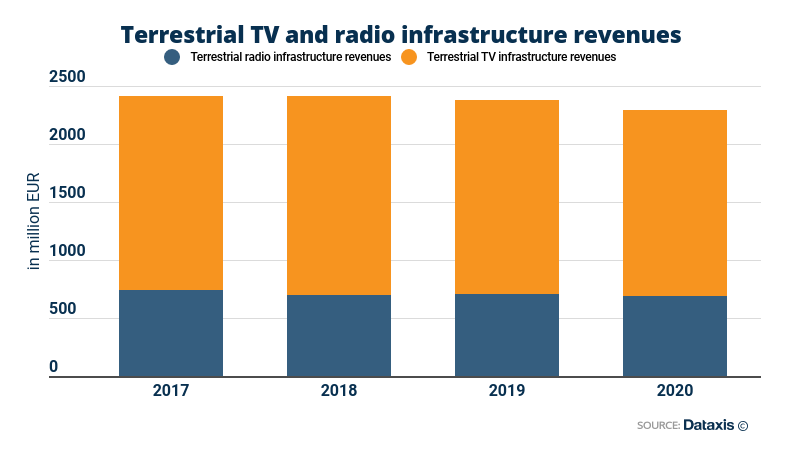 Terrestrial broadcast network infrastructure operators in Europe have garnered revenues exceeding €2.3 billion for TV and radio transmission in 2020, a stable amount compared to previous years. According to research company Dataxis, revenues are expected to remain essentially flat up to 2026. The result excludes revenues from diversifications in OTT, telecommunications and IoT.

The FM and DAB transmission services paid by radio broadcasters to network infrastructure service providers amounted to €690 million in 2020, or 6% of the €11 billion revenues generated in total by the European radio industry in 2019, the last regular year for the sector. In 2020, the European radio industry revenues decreased by 8% to €10.2 billion due to the impact of the COVID-19 pandemic on radio advertising markets. This percentage varies depending on the country, and ranges from 11% in France to 8% in the UK for instance.

Digital terrestrial television (DTT) transmission revenues exceeded €1.6 billion in 2020. In Europe, DTT access is widespread in only four countries, which consequently represent two-third of the transmission market: the UK, France, Spain and Italy.

Besides, in this latter country the figure includes 6% of households receiving a DTT offer via the antenna service of SFR cable TV, and 1.4% via Canal+ pay DTT, that is, less than 400.000 subscribers at the end of 2020. The share of DTT-only FTA households is therefore closer to 14% of TV households in France. The French TV broadcasters, essentially France Televisions, TF1, M6 and Canal+, spend more than €200 million per year to the terrestrial networks TDF and Towercast to reach a decreasing number of households, mostly located in rural areas and often retired. This cost currently represents €3 per month and per DTT user in the country. In the UK it reaches lower levels at €2.4, in Italy €2.85 and in Spain €1.6.