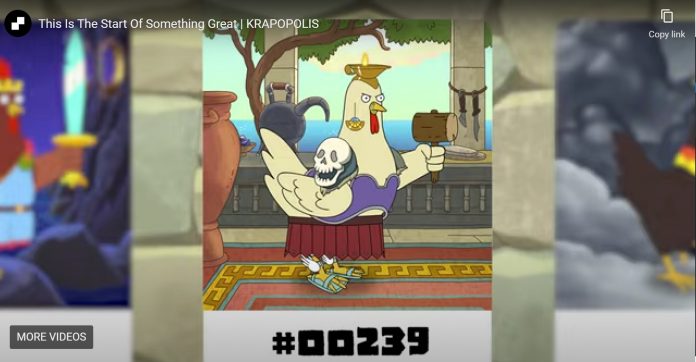 Dan Harmon, the creative force behind the hit series “Rick and Morty” and “Community,” and FOX Entertainment’s Web3 media and creative technology company, Blockchain Creative Labs, have unveiled krapopolis.com, featuring utility-focused, chicken-inspired NFTs ahead of the debut of FOX’s new animated comedy, KRAPOPOLIS. The programme’s inaugural collection of “Krap Chickens,” a series of limited-edition NFTs, will drop for purchase on Thursday, August 11.

Marking the first animated comedy to be curated on the blockchain, KRAPOPOLIS is set in mythical ancient Greece and tells the story of a dysfunctional family of humans, gods and monsters that try their hand at running the world’s first cities – without trying to kill each other, that is.

Fans of Harmon and the program will have the opportunity to purchase and collect NFT “Krap Chickens” that unlock exclusive utility and social media clout, including digital and real-life experiences within the KRAPOPOLIS universe. In addition to being one of history’s earliest forms of currency, the “Krap Chickens” NFTs will give collectors access to KRAPOPOLIS’ burgeoning digital ancient civilization, such as token-gated access to content and private screening rooms, entry to Discord channels, invitations to meet-and-greets with cast and producers, KRAPOPOLIS merchandise, series voting rights and first-look exclusivity to forthcoming NFT drops.

Krapopolis.com will drop 10,420 “Krap Chickens” in total. Why 10,420? Because that’s about how many seconds it would take a chicken to run a marathon, obviously. Each minted NFT will be unique, produced and illustrated by KRAPOPOLIS animators and generated from a wide range of attributes with varying degrees of rarity. All NFT artwork will originate directly from content that appears in the program.

Set to premiere on FOX in 2023 and created by Harmon, KRAPOPOLIS features the voices of Emmy Award winner Hannah Waddingham (“Ted Lasso”), Richard Ayoade (“The IT Crowd”), Matt Berry (“What We Do in The Shadows”), Pam Murphy (“Mapleworth Murders”) and Duncan Trussell (“The Midnight Gospel”). KRAPOPOLIS is produced by FOX Entertainment’s Emmy-winning animation studio, Bento Box Entertainment. The program is fully owned by FOX Entertainment. Jordan Young is executive producer/showrunner, working under Harmon’s supervision and handling the series’ day-to-day activities.