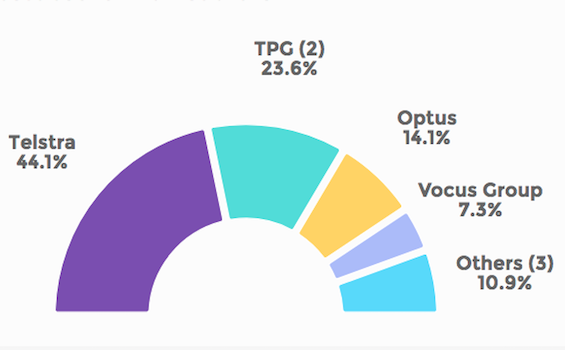 Almost 8.6 million residential broadband services are now on the NBN and 58 percent are on high speed services of 50Mbps, with an additional 15 per cent of customers on speeds of over 50Mbps, the ACCC’s latest NBN Wholesale Market Indicators Report reveals.

As the majority of the ‘Focus on Fast’ promotional discounts have now ended, the number of very high speed services over 100Mbps fell by about 108,000 services, or 24 percent, in the quarter. However, almost half of the households that took up very high speed plans in 2021 remain on services above 100 Mbps.

“We encourage consumers to trial new services, but it’s important that they think about their internet usage and choose the speed tier that best fits their needs,” ACCC Commissioner Anna Brakey said.

Aussie Broadband continued to make gains in the December 2021 quarter, increasing its customer base by about 46,000 and lifting its wholesale market share to 5.6 percent, up from 5.1 percent in September 2021. Superloop also increased its share in the quarter to 1.7 percent.

“We are glad to see continued growth from smaller NBN providers. Their presence in the market keeps pressure on the big four of Telstra, TPG, Optus and Vocus to maintain a high quality, competitive service,” Ms Brakey said.

New South Wales, Victoria and the ACT experienced large CVC declines, while the other states and territories increased, which suggests lockdown restrictions easing in the eastern states influenced the overall CVC reduction in the quarter.

NBN providers expanded their presence at the 121 NBN Points of Interconnection (POIs), which are the physical locations where providers can connect to the NBN. In the December quarter there were at least 13 NBN providers directly acquiring NBN services at 121 of the POIs, up from 119 POIs in the September quarter.

“Some of the smaller regional retail providers are expanding their POI footprints nationally, and that will give greater variety of internet providers to consumers in more locations,” Ms Brakey said.