How Can Pay TV Channels Offset the Decline in Affiliate Revenues 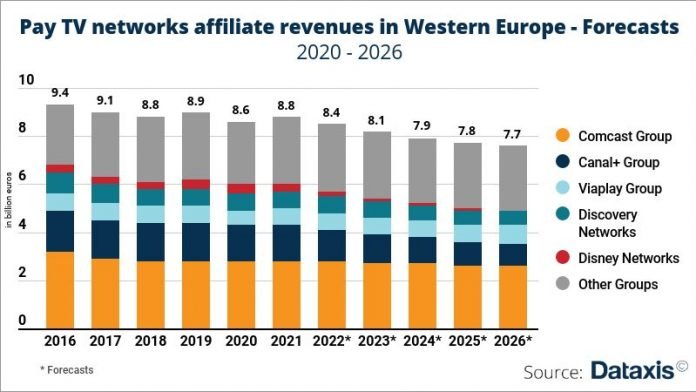 Disney closing most of its channels in Western Europe and Sony Pictures selling its UK and CEE operations are two examples illustrating the diversion of traditional TV players away from linear and towards other forms of distribution, including in particular the launch of direct-to-consumer OTT services. Is this the only way forward for linear TV networks to secure growth?

Affiliate revenues, which are the main source of revenue for paid channels, are expected to drop by 12 percent between 2021 and 2026. Current changes in consumption habits are pushing users towards more flexible content offers, particularly developed on OTT. An increasing number of users are consequently switching off their traditional pay TV standalone subscriptions (cable, terrestrial, satellite) and reducing the amount spent on TV services. The current state of the content distribution market is therefore putting pressure on telecom operators’ revenues, rising tensions in affiliate fees negotiations with pay channels, as shown during the dispute between Discovery and Sky in the UK and Germany, when Discovery’s channels were almost removed from the Sky network because of carriage fees disagreements.

While TV revenues started to decrease, the costs of audiovisual content production and acquisition are experiencing an inflationary trend due to streaming pure players’ massive investments in original production, and following the financial and operational difficulties created by COVID-19 restrictions. In this market environment, content creators are looking for other sources of revenue, often taking advantage of the rise of OTT.

Indeed, OTT D2C allows TV networks to free themselves from operators’ networks, save on distribution fees and create a direct source of revenue. It allows greater flexibility in content distribution to match users’ consumption patterns, alongside the development of more direct relationships with them. Besides, OTT facilitates international expansion since distribution doesn’t rely on operators’ fixed networks. The most striking example here is the Viaplay Group which was originally offering pay TV channels in Scandinavian countries, and is now present in five more countries with plans to make its platform available in 16 countries overall by 2023. This strategy is also deployed by US majors with the launch of Disney+, and more recently the rollout of Discovery+ and Paramount+ in Europe. However, it comes with a cost, since it’s now up to them to acquire users and develop their own distribution service.

If affiliate fees are still a substantial source of income for TV networks, it is expected to decrease in the future – as illustrated by Canal+’s 37 percent  estimated decrease in affiliate revenues between 2021 and 2026. This also translates the strategic orientation of the group towards its OTT platform MyCanal as revenues generated through the digital platform should offset the Group’s losses in affiliate revenues in Western Europe.

However, whereas traditional live television has been losing attractivity in the eyes of Western European audiences, linear consumption should not be put too quickly aside. Channels benefit from a strong editorial expertise and some players started to develop appealing lean-back experiences on OTT with FAST channels – an approach illustrated by ViacomCBS’s PlutoTV service launched in 2018 in Europe. FAST channels, and ad-supported streaming offers in general, represent another opportunity for traditional content editors to capture digital advertising revenues at a time when digital advertising expenditures keep on progressing, often at the expense of broadcast advertising. In the UK, ITV’s overall advertising revenues increased by 24 percent  in 2021, while digital advertising revenues constituted a main post-covid recovery driver with a 41 percent increase.

In a market where actors have been relentlessly adapting their offers in recent years, the optimal business model, preserving content providers’ revenues while meeting customers’ demands for flexibility, could still undergo major transformations before achieving stability.