Broadcast equipment manufacturer Inovonics, Inc. was initially financed and has been wholly owned by Jim Wood and his immediate family following the founding of the company in 1972. Jim managed Inovonics until 2006, the year he turned day-to-day operations over to COO Ben Barber. Ben was elevated to President/CEO in 2012. 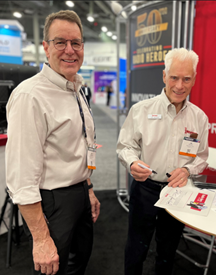 At age 80, and with 50 years of Inovonics employment under his belt, Jim Wood has made the decision to formally retire from the firm.  Under undisclosed terms of an agreement recently concluded, Ben Barber became the new owner of Inovonics, Inc. on August 1st.

According to Wood, “Ben has evolved into a much better manager and planner than I ever was, and under Ben’s guidance the company has dramatically increased its presence, market share and prestige within our industry.”  Jim goes on to say that the change in ownership is “nominal” for the most part, that Ben’s decisions over the past 16 years represent the direction the company will continue to follow.

Jim plans to maintain ties to Inovonics in an informal advisory capacity, but will keep busy in his retirement with projects he’s had to put off over the years due to his concentration on business.