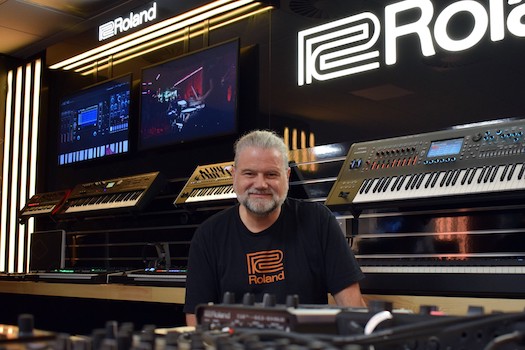 As Roland celebrates its 50th anniversary, the brand has significant plans to expand store locations worldwide and continue to evolve and grow as a global company. As Roland Corporation’s first European CEO and representative director, Raison will lead the company into its new growth phase, continuing to consolidate global team structures, enhance marketing efforts, and aid in supply chain management innovation across all teams.

Raison joined as head of Roland’s European team in September 2013, working alongside Jun-ichi Miki to aid in the company’s reform following the brand’s most critical financial crisis since its incorporation 50 years ago, and eventually becoming CEO of the Overseas Unit at Roland Corporation in 2017. In his most recent role as director at Roland Corporation, Raison led sales and marketing efforts across the company aiding in the brand’s growth over the past nine years. As Roland continues to grow and expand globally, Raison will leverage his decades of marketing, sales, and finance experience to guide Roland into this new phase.

“I sincerely appreciate the trust given by the Nomination and Remuneration Committee, as well as the Board of Directors, and I am thrilled to be afforded this opportunity,” said Raison. “Though I am British, I fully understand the strength of a Japanese company, the Japanese culture, and of Roland Corporation. Roland has developed its business for 50 years, innovating music globally. I would like to create a structure in which global Roland members can collaborate as one team to continue to grow over the next 10 to 20 years.”

Raison succeeds Jun-ichi Miki, who assumed the position of CEO in April 2013 and led the structural reform of the company aiding in the enhancement of product competitiveness and rebuilding of the brand image. Having worked alongside Raison during the reform, Miki believes Raison’s contribution to the brand’s sales growth and his clear understanding of how to motivate team members across different countries makes him the best candidate for the position. As Roland moves into the next growth phase focused on enhanced marketing, continued evolution as a solutions provider, as well as supply chain management innovation, Raison will leverage his prior experience to push the company forward. Miki will continue to support the company as an advisor.

“Gordon Raison assumed the position of CFO at a global company and has a lot of experience in sales and marketing. Since he joined our company in September 2013, he took charge of global sales and marketing and contributed to substantial sales growth,” said Miki. “I fully trust the new management team and would like to continue to support the company’s growth as an advisor. Our company will continue to make its best efforts to offer exciting innovation globally and to grow as a company appreciated and supported by people.”