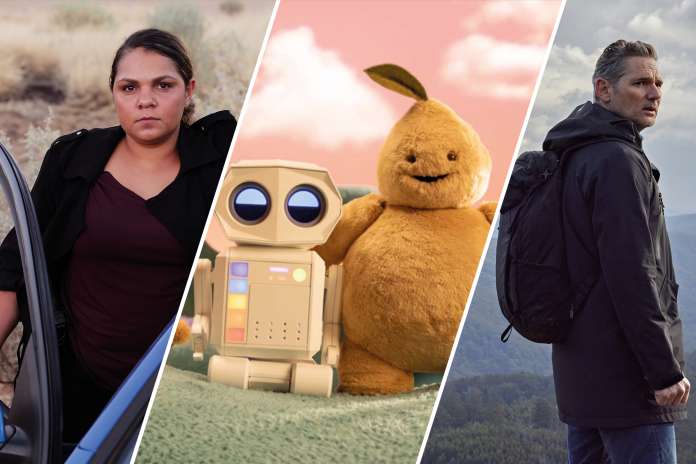 Screen Australia’s 32nd annual Drama Report  shows an all-time high expenditure in Australia on scripted screen production of AUD$2.29 billion, made up of a record spend on Australian titles of $1.51 billion, plus $777 million spent on foreign productions.

Overall $2.29 billion was spent across 162 drama screen productions that commenced production or post production in Australia in 2021/22 compared to $1.94 billion spent across 163 productions in 2020/21. The increase was driven by a record spend on Australian theatrical features ($786 million up from $495 million last year), as well as a record spend on Australian subscription TV and Subscription Video On Demand (SVOD) – for which number of titles, hours and budgets have tripled from 2020/21. Spend on Free-to-air (FTA) TV and Broadcast Video On Demand (BVOD) drama, and children’s drama across TV and VOD platforms also increased from last year, but has not returned to previous highs in either category.

Minister for the Arts, The Hon Tony Burke MP said, “This is a great result and testament to the strength of our local screen industry. It shows the importance of the creative sector and the appetite for Australian drama. It’s fantastic to see Australian stories being told here at home and to global audiences.”

Screen Australia CEO Graeme Mason said, “Hitting well over the $2 billion mark is an incredible milestone for our sector, and it’s truly a bumper year for Australian scripted content – to have local productions make up 66% of this spend is extraordinary. Distinctly Australian stories continue to captivate audiences here and overseas, with Heartbreak High reaching the top 10 on international Netflix charts, and shows from Bluey to Bump taking the world by storm.”

“This is a unique year for feature film, with several high-budget Australian projects starting production including Dr George Miller’s Furiosa which are bringing significant economic and creative benefits. However the number of Australian films that went into production has decreased. It’s no secret that the content landscape across film, television and online has changed and viewing habits are continually evolving. This is most evident in the reduction in films being produced for theatrical release, the shift in drama spend from television to online platforms, and the increasing spend on premium drama.”

“While it’s a crowded market the appetite for local content remains, and it’s heartening to see increased Australian projects produced for streaming platforms in 2021/22. Screen Australia is committed to supporting a range of stories for big and small screens, from The Dry’s sequel Force of Nature, to mystery series True Colours featuring Arrernte languages, to the third and final season of YouTube mega-hit Meta Runner.”

“We know the value and power of Australian children’s stories, and it’s vital for our kids and our national identity that Aussie children are able to see themselves reflected on screen. Children’s content has declined from historic highs as the sector adjusts to digital disruption, new audience habits, and changed content regulations and funding support. Despite this there are still high quality projects going into production with some wonderful titles to enjoy from this year’s slate including Barrumbi Kids shot in the Northern Territory, Crazy Fun Park in Victoria, Beep and Mort in South Australia, Rock Island Mysteries in Queensland and The PM’s Daughter in Canberra and New South Wales.”

“While foreign production spend has dipped from last year’s record year, it’s still looking healthy against the 5-year average. Projects like Ticket to Paradise offer important opportunities for Australian creatives to cut their teeth on big international productions and we have more to look forward to next year with the Kingdom of the Planet of the Apes and the sequel to Godzilla Vs Kong. Australia has also made a name for itself in PDV, with projects including The Flash and The Marvels undertaking work here, and we’re thrilled to see this part of the sector growing to record highs.”

“Our focus now is to work together with the industry to address gaps in skills and capacity that have come as a result of the production boom, to ensure we are in the best position to keep up the pace and further boost the potential of Australian stories and storytellers,” Mason continued. 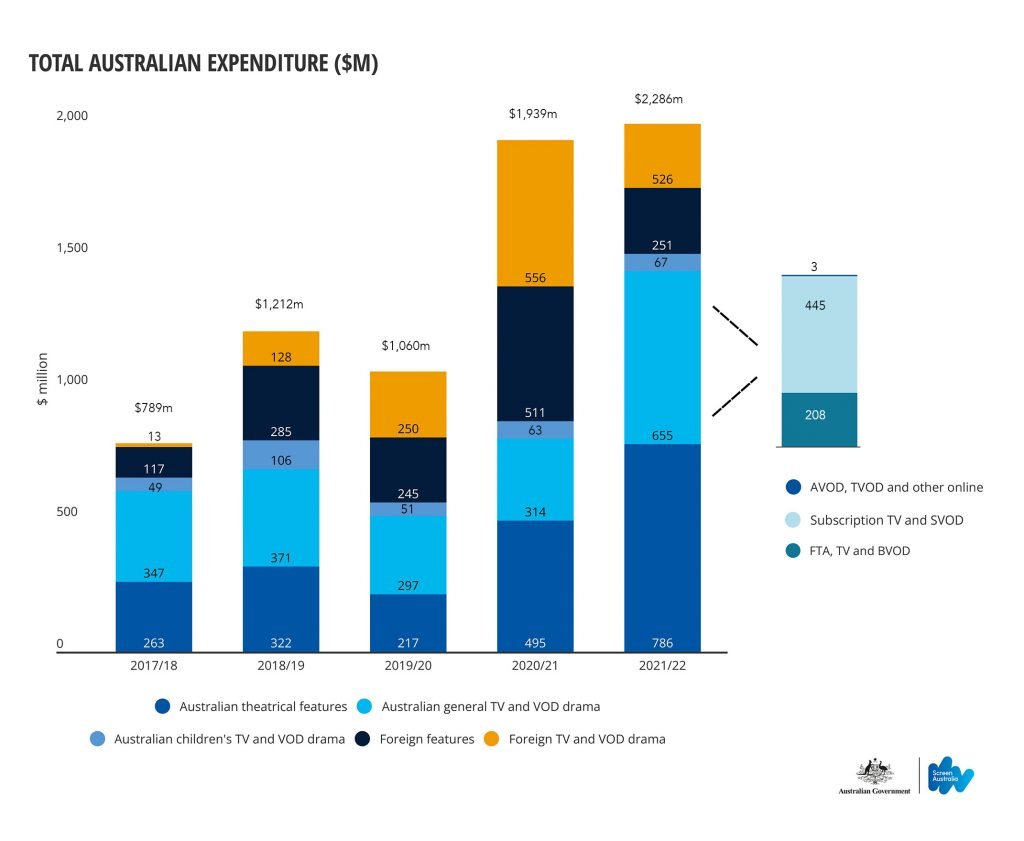 The Drama Report uses data from industry to provide an overview of the production of local and foreign feature, television, VOD and children’s drama titles, as well as PDV activity. All production expenditure is allocated to the year in which principal photography began. PDV employs a secondary method of analysis, which is outlined in the PDV section below, and in the report. ‘Drama’ refers to scripted narratives of any genre. This Drama Report uses new categories for Australian drama, providing better insights into production of general and children’s drama across all platforms. All data in the report has been re-categorised, enabling analysis of trends.

In 2021/22, total spend on Australian theatrical feature films reached a record $786 million — an increase of 59% on 2020/21, and 89% up on the 5-year average. This result came with 24 features going into production, 35% below the 5-year average. Higher budget projects Furiosa, Better Man and Foe accounted for a significant proportion of the record spend.

Most of the projects were made for over $5 million, and the number of titles made for under $1 million continued to decline.

Foreign investors contributed the largest share of finance to the 2021/22 slate, making up 44% ($347 million). In total, domestic governments and government agencies provided 45% of total finance for Australian feature films in 2021/22. This includes 35% from the Federal Government, via the Producer Offset and Screen Australia direct funding. 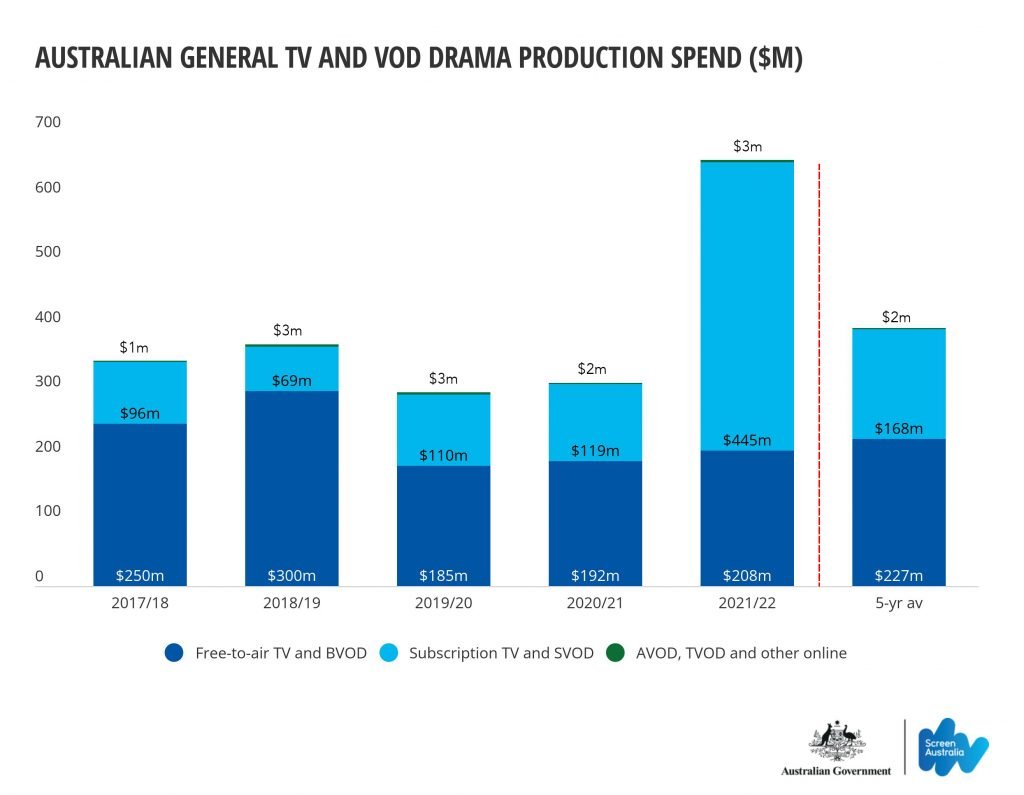 FTA TV and BVOD drama is drama first released on either FTA television — ABC, NITV, SBS, Seven, Nine and 10 — or those broadcasters’ online platforms — ABC iview, SBS On Demand, 7plus, 9Now and 10 play.

In 2021/22 there were 24 Australian titles totalling $208 million expenditure, an increase of 8% on last year, but 8% below the 5-year average. Of these titles, 19 were created for the public broadcasters. The number of hours produced for FTA broadcasters has been in steady decline since 2000/01, when 715 hours of general drama was produced for free-to-air television, and this year there were 278 hours generated.

The number of series/serials produced decreased for the third year in a row, with nine titles down from the 5-year average of 16. Titles included Home and Away (Seven), Neighbours (10) and Aftertaste (ABC). Eleven mini-series entered production – steady on last year – including Barons (ABC), After the Verdict (Nine), and Safe Home (SBS).

This year 29 Australian titles entered production, up from just nine in the previous year. Spend increased significantly to a record $445 million, up from $119 million in 2020/21 and more than double the 5-year average.

There was increased production across most platforms, including Stan which had seven titles in this year’s slate, including Bad Behaviour and Bump series 2 and 3. Paramount+, Amazon Prime and Netflix had four titles each enter production, three titles were produced for Foxtel and one title for Binge (Colin from Accounts).

AVOD, TVOD AND OTHER ONLINE

General AVOD, TVOD and Other Online drama is drama first released on a variety of services including AVOD (Facebook, Instagram, TikTok and YouTube), TVOD (iTunes) or other emerging online services. Note this report only includes projects with a minimum of 30 minutes total duration.

In 2021/22, nine Australian titles generated $3 million in expenditure and 8 hours of content. This was a drop in titles and hours on last year by 10% and 29% respectively, but the cost-per-hour rose by 53% indicating a shift to higher production values. Titles included 2 Street 2 Racer and Meta Runner – The Final Season, both for YouTube, and Krystal Klairvoyant for TikTok.

Results in children’s television were largely consistent with the previous year, with 11 titles entering production (the same as 2020/21) generating $67 million (a 5% increase) in spend in Australia. While hours increased by 12% from last year, they were 32% below the 5-year average, the data from the past five years shows an overall decline in production from a peak year in 2018/19.

Of the 11 titles in 2021/22, the ABC financed eight, including animations 100% Wolf: The Book of Hath, First Responders, Ginger and the Vegesaurs and Kangaroo Beach series 2, and live action titles Beep and Mort, Crazy Fun Park, First Day series 2 and The PM’s Daughter. NITV financed the live-action series Barrumbi Kids. One title that entered production in 2021/22 was financed by the commercial free-to-air broadcasters, Rock Island Mysteries (Network 10), and Gymnastics Academy: A Second Chance! was financed by Netflix. 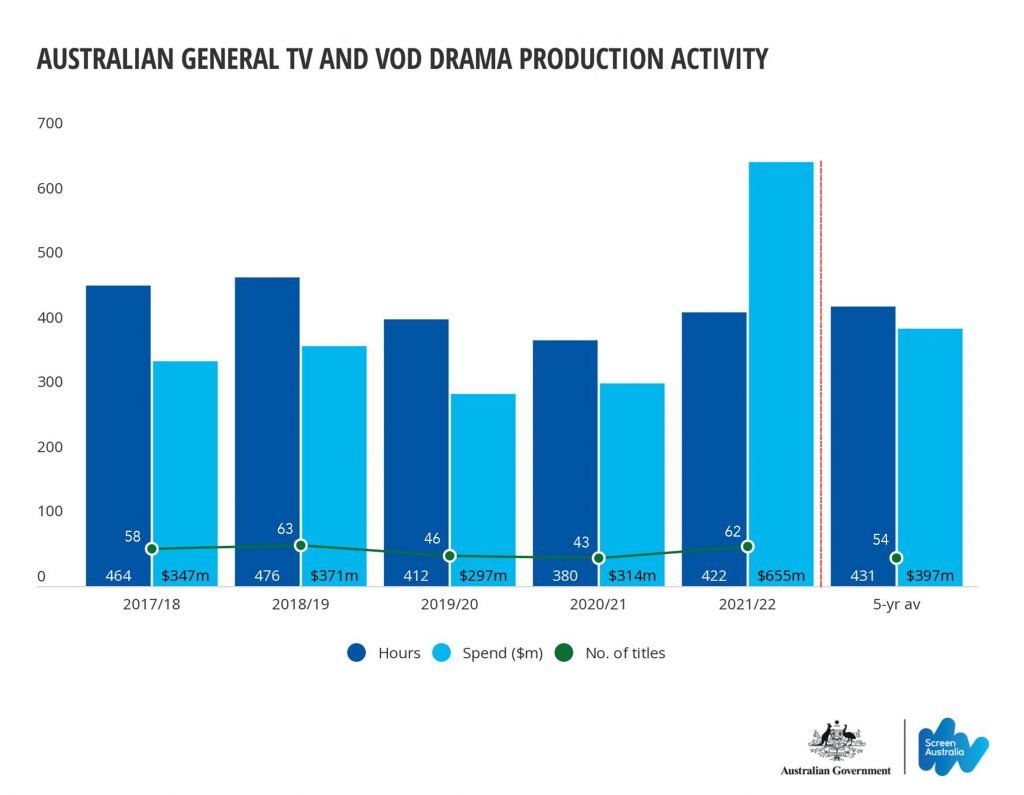 Within this total, foreign titles that shot in Australia reached $442 million, including Joe vs Carole, Nautilus, La Brea series 2 and Young Rock series 2. This was 44% below last year’s record spend, but 19% above the 5-year average.

In contrast, spend on foreign PDV-only titles rose to a new record of $335 million, an increase of 22% from last year and 65% above the 5-year average. Titles included Borderlands and Lyle, Lyle, Crocodile.

To provide a sense of the ongoing business activity of PDV companies in a given financial year, the PDV Services section of the Drama Report uses a different data timeline to the rest of the document. In this section, a project’s total PDV spend is reported as it occurs, rather than attributing the whole amount to the year in which work commenced. The data cannot be compared to that presented in other sections of the Drama Report.