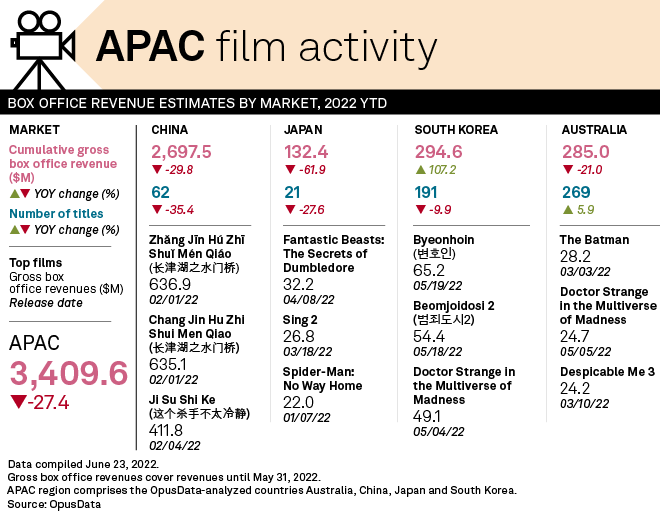 Key data highlights from the analysis include:

Asia-Pacific cinemas recorded a 27.4 percent dip in film earnings year over year (y/y) between January and May with cumulative gross box office revenue at about $3.41 billion, according to figures from OpusData compiled by S+P Global Market Intelligence.

While the region maintained a negative revenue figure, South Korea was the only monitored market where local productions and Hollywood titles kept the box office afloat. The country’s film earnings in the first five months of the year grew 107.2 percent y/y to $294.6 million, the second highest among tracked markets. China, Japan and Australia reported a slump in box office collections.

China continued to contribute the lion’s share of the region’s box office revenue, leading the table with about $2.7 billion for the period under consideration. This was, however, 29.8 percent lower y/y over the comparable period.

Japan had the weakest box office numbers among tracked markets in Asia-Pacific year-to-date, registering a 61.9 percent y/y decline in revenue at $132.4 million.

In May, the Asia-Pacific region saw 97 film releases against 103 titles released in May 2021. Action and adventure were the preferred genres in the region.

The full analysis can be found here.