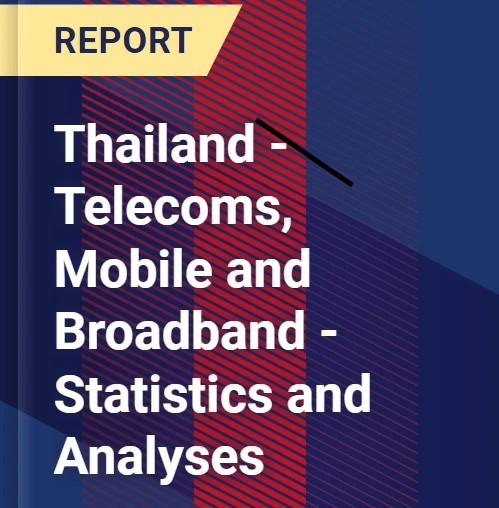 The ‘Thailand – Telecoms, Mobile and Broadband – Statistics and Analyses’ report has been added to ResearchAndMarkets.com’s offering.

In the early stages of Thai’s broadband market development, there was widespread adoption of DSL services, together with a significantly lesser deployment of cable broadband, as well as some broadband wireless access. The transition to these other technology platforms had previously been inhibited by the Thai regulatory environment, which saw ISPs unwilling to invest in the necessary infrastructure.

Although fixed broadband penetration remains low compared to other developed Asian markets, the rate increased from 7 percent in 2012 to above 19 percent by the end of 2021. The regulator noted that the number of subscribers increased 14.3 percent in 2021, year-on-year, as subscribers continued to adapt to the particular requirements for broadband services during the pandemic. Sustained, though slower, growth is anticipated during the next few years as the major providers continue to rollout their fibre networks.

In recent years, fibre broadband has seen strong growth, particularly in major metropolitan areas. The sector’s major players are increasingly investing in their last-mile fibre deployments. Although the returns from this are still a long-term proposition, fibre’s cannibalisation of copper-based connections is a well-established trend in the market. This became particularly marked in 2021, when many copper-based connections were migrated to the fibre platform.

A fibre-based Metro Ethernet service offering data at up to 10Gb/s for corporate customers was introduced by True Online in 2011, focused on corporate buildings in Bangkok. In late 2014 the company began investing THB43 billion to overhaul existing fixed and mobile platforms. Some THB33 billion was earmarked to expand its fibre broadband access network to reach around four million premises in Bangkok and other provinces.

For its part, AIS launched its residential fibre broadband service, ‘AIS Fibre’, in 2015, offering speeds of up to 1Gb/s via FttP. AIS has allocated part of its THB30-35 billion capex guidance for 2022 to growing its fibre network footprint and customer base. The operator reported gaining 435,100 new customers in 2021, representing about 25 percent of all net additions, across the sector, for the year.

Covid-19 and its impact on the telecom sector