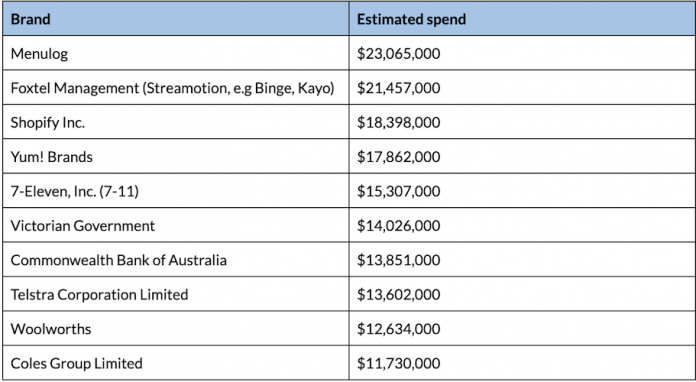 New data from the marketing intelligence platform, Pathmatics, has revealed the top 10 Aussie brands when it comes to digital ad spend throughout H1 2022.

Commentating on the trends, Eugene Du Plessis, Regional Director ANZ at Pathmatics and Sensor Tower says: “The first half of 2022 has flown by, bringing with it a flurry of cultural and economic changes. This has correlated in key peaks and troughs in digital ad spend as brands had to adapt to the ongoing changes in consumer behaviour relating to these societal events. Menulog was the top spender during this period as the food delivery service cleverly tapped into consumer demand as covid cases reached some of its highest peaks at the beginning of the year.

“Streaming platform, Streamotion (Binge and Kayo), took the second spot with digital ad spend peaking in May. This coincides with the news that Netflix was experiencing an increase in subscription cancellations, with Streamotion targeting the mass of customers looking for alternative streaming platforms. Sensor Tower data reinforces this trend, with Binge and Kayo featuring as the best performing streaming app in the entertainment category in terms of revenue in Australia over the past year.

“With economic pressures mounting and many Aussie consumers feeling the pinch on their purse strings, we saw the financial services category come out top for digital ad spend during the first half of the year. Spikes in ad spend can be seen in May and June as interest rate rises were announced. Ad messaging centred around  financial support for consumers who may be struggling to navigate the aftershocks of these rake hikes. As we buckle in for the second half of the year, Pathmatics will continue to track key events and corresponding ad trends, lifting the lid on which industries and brands are spending big.”