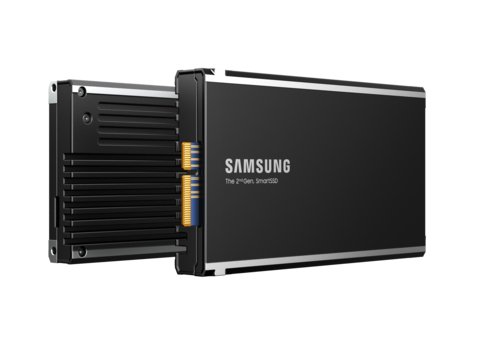 Samsung has announced it has successfully developed a second generation of its pioneering SmartSSD.

The new proprietary computational storage incorporates data processing functionality within a high-performance SSD. Unlike existing SSDs, Samsung’s SmartSSD can process data directly, thereby minimising data transfers between the CPU, GPU and RAM. This technology can avoid the bottlenecks that often occur when moving data between storage devices and CPUs, resulting in markedly improved system performance and much higher energy efficiency.

The SmartSSD is playing an increasingly important role, especially with the growth of next-generation technologies such as AI, machine learning and 5G/6G, which require large amounts of data processing.

Leveraging software and intellectual property developed by customers, along with in-built Arm cores, Samsung’s second-generation SmartSSD enables much more efficient data processing. Compared to conventional data centre solid-state drives, processing time for scan-heavy database queries can be slashed by over 50 percent, energy consumption by up to 70 percent and CPU utilisation by up to 97 percent.

“Commercialisation of the first-generation SmartSSD, in collaboration with AMD, established that the computational storage market has great potential,” said Jin-Hyeok Choi, Executive Vice President and Head of Memory Solution Product and Development at Samsung Electronics. “With the upgraded processing functionality of the second-generation SmartSSD, Samsung will be able to easily address increasing customer needs in the database and video transcoding sectors, as we expand the boundaries of the next-generation storage market.”

Samsung Electronics is leading efforts to standardise SmartSSD technology through close collaboration with the Storage Networking Industry Association (SNIA) and with NVM Express, while seeking to expand the boundaries of SmartSSD devices through technological validation for a wide variety of applications.