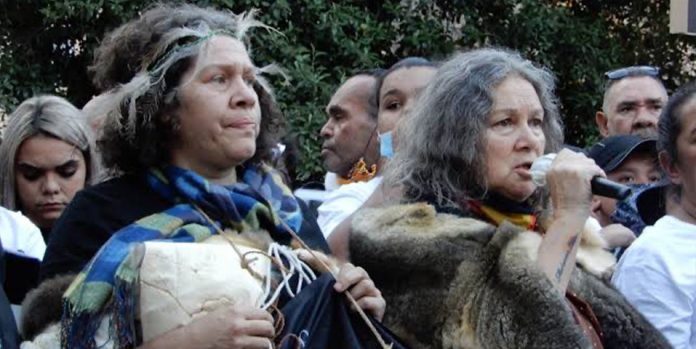 Aunty Rhonda recently gave a keynote address, The Protocols for Working on Gadigal Country, at AFTRS Virtual Open Day, in which she detailed the cultural, historical and political journey of the Gadigal/Bidgigal traditional descendants and protocols for studying and working respectfully on Gadigal/Bidgigal Land.

Aunty Rhonda is an Elder and Traditional descendant of the Sydney ‘Warrane’ Saltwater basin – home of the Gadigal/Bidgigal people – and is the daughter of Aboriginal activist, leader and Freedom Fighter Dr Charles ‘Chicka’ Dixon. She continues her family legacy with her leadership in the Black Lives Matter – Stop Black Deaths in Custody movement and in fighting climate change.

Aunty Rhonda’s father was a wharfie, and his father, Jim Dixon, was a wharfie before him. Through the example set by her father, she was inspired to educate herself. Chicka Dixon always attributed his days of working on the wharves to having learnt about politics, strategic moves and public speaking, and the family still has strong connections with the Maritime Union Australia (MUA) today. This ongoing connection is exemplified by the MUA continuing to stand with them in unity and solidarity at the Climate Justice and Black Lives Matter – Stop Black Deaths in Custody rallies.

For more than 50 years, Aunty Rhonda has been a professional performer and Cultural Arts Educator within the education system and for corporate bodies, cultural festivals and other organisations such as remand centres and correctional centres.

At 17 years of age, Aunty Rhonda sang alongside Jimmy Little and has since performed with Yothu Yindi, Kev Carmody, Paul Kelly, Archie Roach, Black Fire and Tiddas. Having always had an interest in theatre and having had acting training under Brian Syron, Australia’s first Indigenous feature film director and a human rights advocate, teacher, actor, writer, stage director, Aunty Rhonda then went on to study at the Eora Centre for the Arts under Lisa-Marie Syron.

For the past seven years, Aunty Rhonda has been active as a researcher, writer, director and actor in plays such as Posts in the Paddock, which was broadcast on the television series Message Sticks. She has a Diploma in Music from the Centre for Studies in Aboriginal Music and undertook a one-year scholarship program at the University of California Los Angeles (UCLA), studying ethno-musicology. She also holds a Master of Aboriginal Studies (Social and Emotional Well Being).

Aunty Rhonda says her mission in life is to live as a powerful, passionate and outspoken woman and to share her knowledge and skills to educate and empower others.

“It’s important to bring arts, dance and storytelling into healing for our people and to get the youth involved in their culture,” says Aunty Rhonda.

Dr Romaine Moreton, AFTRS Director of First Nations and Outreach, said, “AFTRS is honoured to have Aunty Rhonda Dixon in the role of Elder in Residence for the next two years, gifting us with her knowledges, experience and passion for social justice, the arts and education.”

AFTRS would like to acknowledge and thank the outgoing Elder in Residence Sonia Smallacombe for generously sharing First Nations knowledges, awareness and integrity with students and staff for the past two years, and her vital contribution to AFTRS school culture.

Uncle Bruce Pascoe served as AFTRS’ inaugural Elder in Residence, from 2017 to 2019.

As well as Aunty Rhonda’s Keynote, Dr Romaine Moreton will also speak at the AFTRS Open Day to be held on Saturday 14 August from 9.00 am – 4.00 pm. Her address, First Nations Sovereign Storytelling, will explore the unique role of each First Nations storyteller in First Nations families, communities, and the nation more broadly.