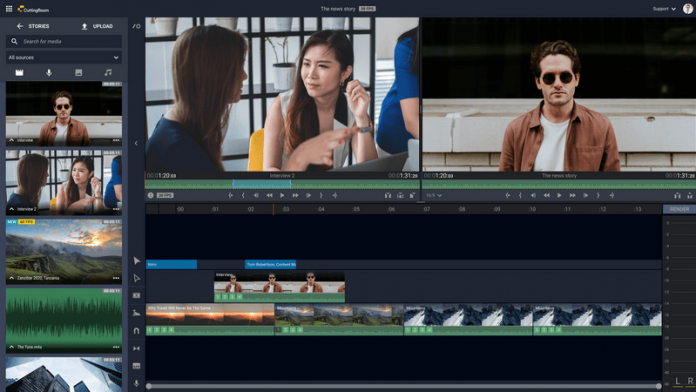 CuttingRoom has announced  the release of its browser-based video editing and publishing tool, designed as the world’s first cloud-native solution for professional editors in the broadcast and AV industries.

On the back of both the significant changes to operational paradigms brought about by the pandemic and an increasingly heavy demand for off-site, remote and distributed production – facilitated in large part by the rise of IP-based broadcast – CuttingRoom seeks to meet the needs of video editors who need to work on collaborative projects in disparate locations, and yet still retain – and indeed improve upon – the reliability, operational speed and quality associated with traditional editing suites.

Using an intuitive and highly functional user interface that incorporates all the expected elements of a source/sequence/timeline editing package, CuttingRoom also allows for Adobe After Effects templates to be integrated, as well as facilitating closed-caption search and metadata management. Moreover, by virtue of an API-based, open architecture, CuttingRoom is capable of integration with major MAM systems; including Vimond, Mimir, Iconik and Wolftech.

In terms of technical specifications, CuttingRoom can ingest both live and recorded video, stills and audio in a range of formats, which can be published in a variety of bitrates, aspect ratios and containers. Rendering is undertaken concurrently, delivering outputs quickly with a consistent performance that is maintained regardless of load. CuttingRoom’s founders – who draw from their experience as the creators of video streaming provider Vimond – estimate that editing with CuttingRoom can be 25x faster than traditional approaches. Most crucially, both editing and rendering can be undertaken simultaneously, with outputs delivered to any location across the globe.

Indeed, it is this capacity for simultaneous collaborative work that represents CuttingRoom’s unique proposition; with no practical limits on the number of simultaneous users who can work on a project, no geographical boundaries or time zone limitations, with absolute reliability guaranteed by built-in 24/7 redundancy, there is no stronger, faster or more intuitive collaborative editing tool currently available to creative teams. The resultant uptake from a range of premier media and entertainment companies globally has seen major broadcast producers create and distribute stories more quickly, simultaneously across a variety of formats to multiple destinations, thus cutting their time to market radically, increasing their flexibility, and decreasing their TCO.

Speaking of the breakthrough that CuttingRoom represents, co-founder Glenn S. Pedersen said: “Editing professionals are being stretched too thin; called upon to work with a variety of tools and deal with a range of technical tasks which distract them from their central purpose: delivering creative, engaging content. CuttingRoom doesn’t just streamline this, it makes it accessible from anywhere in the world, to anyone, working in groups of whatever size they need. It grants the power of connectedness, which is more important than ever in the field of broadcast and AV”.

Commenting further on the potential of this powerful new cloud-based editing suite, co-founder Helge Høibraaten concluded: “With CuttingRoom, we’re finally delivering a complete workflow. Editors have everything they need to work together – with all files, assets and timelines maintained centrally and accessible simultaneously. The result is the ability to deliver beautiful, consistent content in an editing environment that guarantees reliability, speed and consistency – with nothing more needed than a license, a browser and a 5Mbps connection. For remote and distributed post-production, there is no more flexible tool than CuttingRoom.”