“Looks That Kill” tells the story of Max Richards, a teenager born with a medical condition of being lethally attractive, whose life is forever changed when he meets Alex, a girl with a bizarre ailment of her own. Written and directed by Kellen Moore, and starring Brandon Flynn, Julia Goldani Telles, Ki Hong Lee, Annie Mumolo, Peter Scolari and more, “Looks That Kill” is the latest film from Syracuse based production company American High, the producers behind “Big Time Adolescence” and “Banana Split.” “Looks That Kill” is distributed by Gravitas Ventures, a Red Arrow Studios company.

With the film’s cinematography consisting of fluid camera movements and continuous takes, the Flying Turtle Post team was challenged with creating long seamless VFX sequences. According to VFX Supervisor and Flying Turtle Post Owner Shaina Holmes, “Our most challenging sequence was referred to as ‘the big one’ because the plates we received included more than 7,000 frames for just this one shot, which was around five minutes of footage. It follows the main character Max through multiple locations with one long time lapse, so we had to seamlessly stitch edits between green screen shots and place lots of speed ramps to go fast, slow and normal speed throughout.”

With the scene bringing the audience through Max’s emotional journey as he travels between a hospital room, memorial service and the outside world, the Flying Turtle Post team relied on Fusion Studio to bring the shots together into one extended seamless sequence.

“We compared this shot to the kitchen sink omelet at a restaurant, because it has everything,” said Holmes. “Lots of artifact cleanup was needed, along with rig removals, creating clean plates to slide objects down a wall, dealing with daylight changes and camera movements, marrying together two forest plates with different camera pans and time of day, and more. With all the speed changes applied and shot stitching, it ultimately was around four minutes long, and we couldn’t be happier with how it turned out.”

Holmes and her team also used Fusion Studio to create impactful invisible VFX for the film, including compositing multiple plates together, such as adding fire to a tree or capturing a cigarette falling through the air; giving a character a nosebleed; creating and distressing weathered signage; turning light bulbs on and creating flashing lights; removing unwanted people, safety rigging and tattoos from shots; and more.

“Whether it’s doing cell screen replacements or beauty fixes or creating split screens to stitch together the best performances, invisible VFX are most films’ unsung heroes as they keep the audience enthralled in the storytelling without distracting them with technical imperfections,” explained Holmes. “Using Fusion Studio, we did a lot of invisible VFX for ‘Looks That Kill,’ such as artifact cleanup, stabilizations, fluid morphs, wipe transitions, and so on, that the audience would never notice, and that’s exactly how it should be.”

Led by Holmes, who currently also teaches VFX at Syracuse University, the Flying Turtle Post team consists of many of her former students who have gone on to pursue careers in post production. With a focus on mentorship, Holmes works closely with the junior artists, who all work from home as the VFX house operates remotely. For example, for “Looks That Kill,” Holmes helped train the team’s junior artists on working with the film’s anamorphic aspect ratio, including how to use Fusion Studio to add anamorphic lens distortion to stock footage so the look was consistent throughout. 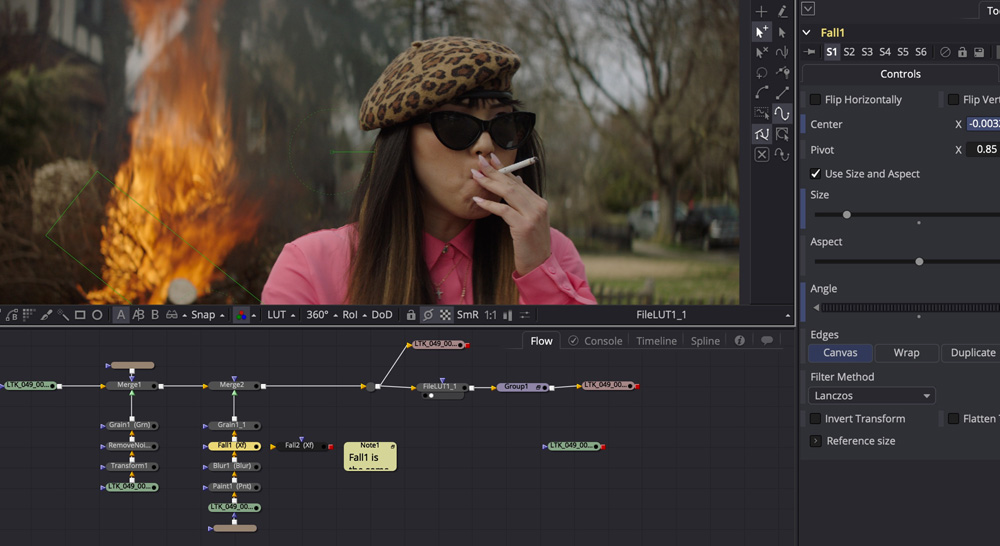