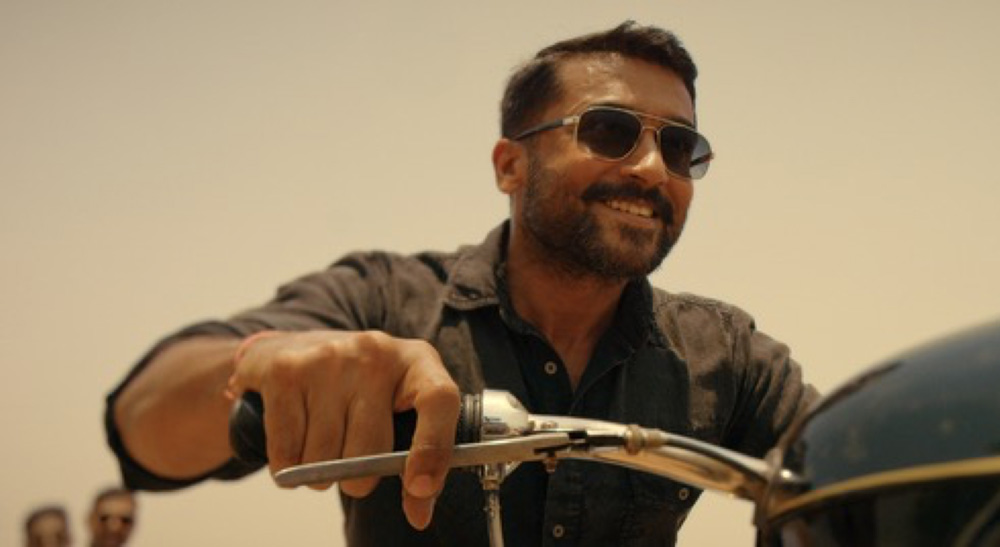 Blackmagic Design has announced that “Soorarai Pottru,” a new Indian Tamil language film, was graded using DaVinci Resolve Studio. The film, which was graded by veteran colourist Suresh Ravi, was selected as one of ten Indian films to be screened under the Best Foreign Film category for the 78th Golden Globe Awards.

Directed by Sudha Kongara and starring Suriya, who also produced the film as part of his 2D Entertainment company, “Soorarai Pottru” is a film inspired by the novel “Simply Fly : A Deccan Odyssey.” It tells the story of Nedumaran Rajangam aka Maara, who sets out to give every day people the ability to afford to fly in airplanes and takes on the most capital intensive industry in the world with the help of his friends, family and sheer will power. The theatrical release through Amazon Prime coincided with the eve of 2020 Diwali festival, and was released simultaneously with dubbed versions in Kannada and Malayalam.

Colorist Suresh Ravi, who has done color grading work on more than 20 films and 150+ commercials and music videos, worked with DP Niketh Bommi to help create the look and feel of the film.

“The narrative of the film travels on the protagonist’s Nedumaran Rajangam’s shoulders. The rage, burden and passion with which he faced all his struggles required a mood to be brought out visually. Niketh Bommi had a pristine vision for this right from the start,” Mr. Ravi said.

The film takes place in the early 2000s, and the cinematography included a large number of hand held shots to narrate the story and dynamically capture dramatic action sequences.

“A warm mood was set to reflect the period of the film. The story happens almost fifteen years back in time, and it required only a select range of colors, in particular hues to bring out the period mood,” he continued. “Maintaining the uniformity in the warm tones was quite interesting to work on as the film was shot in multiple landscapes and in different temperatures. The main task while grading was to remove unnecessary colours in the frame which were unavoidable during filming. This process was quite crucial in bringing out the tone required for the mood of the film and I relied on DaVinci Resolve for this.”

He continued: “Major sequences involved Resolve’s Power Windows to create depth in dynamic shots. Most importantly the consistency of the film was achievable because of the flexibility of Resolve. Its node based workspace helped us save a lot of time, especially during the delivery stages of the project. Resolve’s built in noise reduction plugin also supported us greatly in fixing the camera noise.”

On top of the dramatic action scenes and warm colour palettes used to create a feel of life in the early 2000s, the film needed to bring out the emotional story and journey of the main character. The lead character, Maara, cried, laughed, ran and was very emotional throughout the film, and Davinci Resolve Studio allowed the filmmakers to experiment with contrast to make the footage crisper so that frames with sweat or tears conveyed the emotions on point.

The film also included a huge amount of VFX shots, and Davinci Resolve Studio was instrumental is enabling this to happen.

“Resolve enabled us to test multiple workflows and fix a pipeline in the early stages of the post production, saving us a lot of time. The blending tools in particular made compositing a smoother experience. In fact certain shots were composited in the grade,” he said.

With the film being delivered in multiple languages and different theatrical platforms, Mr. Ravi used DaVinci Resolve Studio’s delivery features to ensure that he met the tight deadlines and requirements for wide distribution.

“The delivery required outputs for multiple platforms, and this was facilitated extensively by the dynamic delivery UI of Resolve, which can deliver outputs in a variety of settings without having to change the entire workflow. The film was also shot using multiple cameras with a diverse range of settings. Resolve was powerful enough to provide the tools which enabled us to handle confirming and delivery in a very efficient way,” he continued.

“Overall, DaVinci Resolve offered me an array of dynamic tools to handle complex sequences in the most efficient way possible. This journey was so smooth and exciting only because of Blackmagic. During the time when I started the other software available were quite complex and not very reachable for a beginner set up. BMD’s inclusive approach was quite instrumental in my learning process, helping me all the way. We are glad we chose Davinci Resolve and would recommend it across to every aspiring colourist,” Mr. Ravi finished.