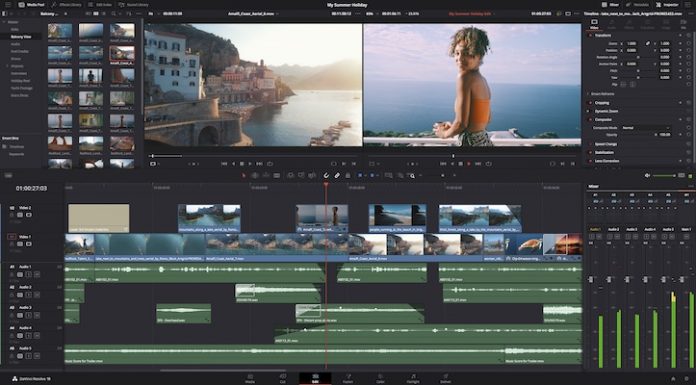 Jones, who began his career in 2006, was inspired to create 3D art with the thought, “If I can think it, I can create it.” He later worked alongside his friends at Corridor Digital and RocketJump to grow his skills in filmmaking and VFX. His YouTube channel streams real time 3D creations to his more than 1 million member subscriber base, and his bimonthly tutorials and challenges have been seen by over 98 million viewers.

While his focus is generating stunning 3D worlds for his followers, Jones is at heart a filmmaker. “I’ve actually been shooting and editing my own short films since 2006 and got into the 3D/VFX world to tell more unique stories,” he said.

Through his process, Jones found that having the ability to edit and grade his work in post production was invaluable to the final look. Having been encouraged to use DaVinci Resolve for editing at Corridor Digital, Jones was amazed at how powerful the tool could be.

“At first, I wasn’t thrilled to have my comfort zone removed,” continued Jones. “Switching from any package always takes a minute to learn, but like anything, if you apply it to an actual project, it’s much simpler. When learning new programs, I like to do so with a small, dedicated project. Naturally, it’ll take me longer to get to the finish line, but it’s low stress enough that I can focus on the learning side of things as opposed to the schedule and deadline side of things. Do this a couple times, and the new tool will naturally integrate into your workflow.”

Early on, Jones found the free version of DaVinci Resolve had all the tools he needed. “Resolve is so streamlined and has everything I want in one place, from a dedicated file management layout, to a super clean editing layout,” he noted. “Fusion, DaVinci Resolve’s built in VFX and compositing toolset, has a layout all of its own, as does the Fairlight audio layout, colour layout and delivery page. Everything is integrated in one place, making post production quick and intuitive.”

Jones upgraded to DaVinci Resolve Studio in 2021. Though he is much more familiar with the software, he constantly discovers more and more tools at his fingertips. “The built in animated titles save me tons of time because I don’t have to build them from scratch,” he said. “I love the colour page because you have so much control over your image, as opposed to the limiting features of other color packages. The dynamic zoom effect, camera stabilisation features, slow motion and de noising effects are game changers to the workflow, and they are all built in!”

“I seem to stumble across new features every couple of weeks,” added Jones. “At some point recently, when I discovered DaVinci Resolve uses artificial intelligence for up scaling, I just remember thinking, ‘of course it does!’ I think the software’s clean layout, stable builds and regular updates makes it a no brainer for anyone trying to tell stories today.”