Second Series of 100% Wolf in Production 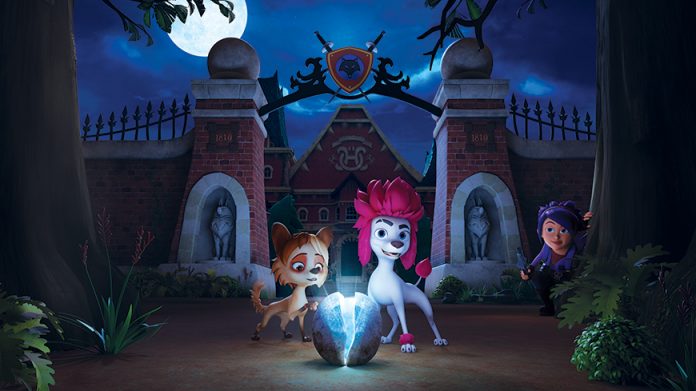 Production is under way on a second season of the hit animated series 100% Wolf, with much of the work being completed in Australia as Flying Bark Productions expands its operations, employing additional artists and investing in up-skilling staff.

100% Wolf is a computer-animated adventure fantasy comedy for 6- to 10-year-olds from Flying Bark Productions NSW for the ABC. It tells the story of Freddy Lupin, heir to the leadership of a proud family line of werewolves – with the body of a poodle.

The first series saw Freddy graduate from the werewolf-only Howlington Academy after defeating wilderwolf leader Ric, uniting the moonstone and reconciling the wolf and human worlds.

Series 2 – 100% Wolf: The Book of Hath – sees Freddy and his young friends return to Howlington to broaden their understanding of werewolf lore and magic, putting this knowledge into practise as they face their most formidable adversaries yet.

The series is produced by Flying Bark Productions, an Australian animation company with studios in Sydney and Los Angeles which has been producing Australian content for more than 50 years. When production cycles are at their peak, Flying Bark employs more than 350 artists at any one time.

Much of the animation work on the first series of 100% Wolf was completed at studios overseas, but as Flying Bark Productions grows, more of the work is taking place locally. On 100% Wolf: The Book of Hath, lighting, rendering, fx, compositing, modelling and surfacing is being done in Australia. For series one, this work was outsourced to studios overseas. Scripts, storyboards and animatics were also completed in Australia.

100% Wolf S2 Animation Producer Isla Curtis says there’s never been a better time to be a part of the local animation industry.

“The Australian animation industry is finally at a stage where a lot of crew can be retained for years at one company rather than moving around at the end of each project,” she said. “With departments such as lighting and effects staying onshore, we’re seeing more opportunities for artists to become multi-skilled. It’s exciting to be a part of such a high-value series like 100% Wolf, with so much incredible Aussie talent involved.”

Critical to this growth has been the introduction by the NSW Government of the additional 10% rebate on qualifying expenditure on Post, Digital and Visual Effects (PDV) carried out in New South Wales. This rebate can be claimed in addition to the Federal Post, Digital and Visual Effects rebate, making it one of the most competitive combinations of rebates for this type of work worldwide.

In addition, earlier this year Flying Bark Productions was named as the first creative-industry recipient of a grant through the Jobs Plus program, another initiative from the NSW government. The funding from Jobs Plus will support the creation of approximately 150 full time positions over the next three years.

Flying Bark Supervising Producer Tracy Lenon says there is a wealth of work in Australia, but a shortage of artists across all departments and levels. She says Flying Bark is always on the lookout for layout artists, fx artists, surfacing artists, lighters, compers, riggers and pipeline artists.

“As Flying Bark Productions grows as a company and takes on more work across various departments, we expand our expertise and become a company that can create animation from concept to completion,” she said. “Having such a broad skill base in 2D and 3D animation, we can carefully choose our service work, as well as create our own IP. This is a great position to be in.”