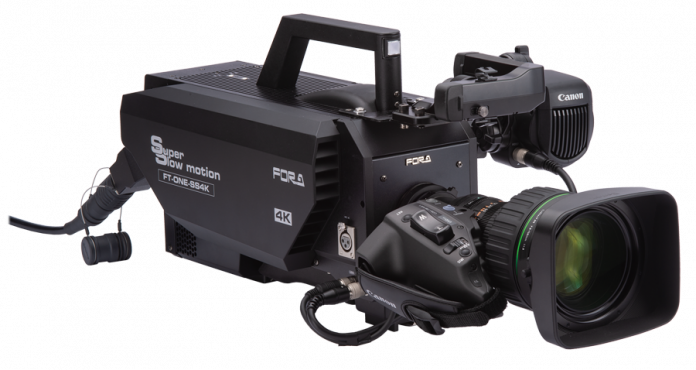 FOR-A Corporation is expanding its focus on live sports production with the introduction of the SMV-ONE, an HD slow-motion visualiser, which creates smooth slow-motion footage from live or archived video. Plus, the FT-ONE-SS4K 4K ultra slow-motion camera has also been upgraded with color matching presets with other companies’ cameras, an advanced workflow, and integration with EVS servers. Both solutions are being demonstrated at the 2022 NAB Show (Booth C5408).

A cost-effective alternative to standard replay systems, the SMV-ONE allows the creation of slow-motion video while recording live sports coverage. Housed in a compact 1 RU chassis, the SMV-ONE supports 1080i or 1080p HD-SDI video and up to 20x slow motion. Its unique precision interpolation technology enables smooth, slow-motion video between the virtual images it generates and source frames.

The SMV-ONE is controlled through included remote control software or via an optional remote control unit. In addition to slow motion playback at various speeds, it offers play, pause, rewind, fast forward, and skip back functions. The camera connects to the SMV-ONE via an HD-SDI cable, and up to four cameras can be connected in an optional configuration.

Beyond sports production, the SMV-ONE can be used to repurpose past surveillance video or other recorded material as slow-motion video for training. Plus, with control via LAN, it can also be used for remote monitoring of factory assembly lines.

Already in use worldwide on a variety of projects, the FT-ONE-SS4K now offers an advanced feature set that includes a dual 2/3-inch CMOS sensor system, which delivers improved performance and versatility for live sports and feature film production. Its imaging system can achieve up to 1000fps high frame rate with high sensitivity and high density.

With its B4 lens mount, the compact FT-ONE-SS4K works with industry standard box lenses and does not sacrifice brightness like cameras that include a PL lens mount and require a lens conversion adaptor. The camera also delivers simultaneous live 4K Ultra HD output and super slo-mo playback output, so it can be included within a conventional camera workflow.

Based on user feedback, the FT-ONE-SS4K supports an advanced slow-motion workflow designed to integrate within existing production environments. With its pre-configured color matching presets, the camera integrates easily into a production using standard speed cameras from other manufacturer. Plus, the camera now links directly to EVS servers for easier, smoother playback.