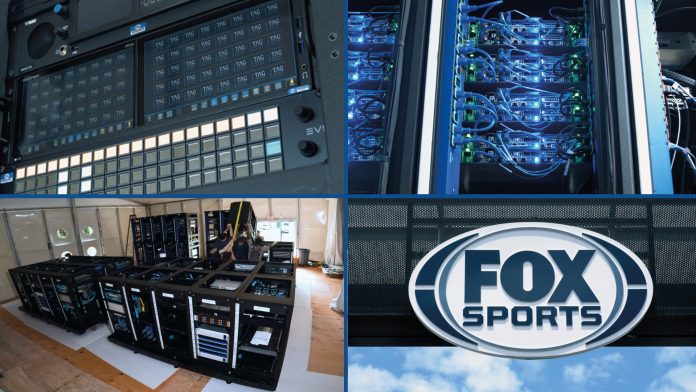 US-based FOX Sports is taking TAG Video Systems to the world’s greatest sporting event in Qatar as its monitoring and visualisation provider. From Sunday, November 20 through Sunday, December 18, FOX Sports will present all 64 matches from the highly anticipated tournament live in the U.S. across FOX and FS1 with every match live streaming on the FOX Sports app and available for free on-demand as replays on Tubi. FOX Sports selected TAG’s 100% IP software platform for all of their control rooms and operations multiviewers, monitoring the integrity of over 1200 sources driving 150+ displays for the most widely viewed single sporting event in the world.

The TAG monitoring and visualisation platform is an integral part of a ground-breaking live-production system built in a totally different form factor. Built as two separate and redundant systems, FOX Sports’ joint event system is the world’s largest transportable SMPTE ST 2110 live production flypack, able to be quickly flown and set up between major events.

Leveraging IP and SMPTE ST 2110 technology, the system was able to move to all fibre, reducing the size and weight of the kit significantly. With a full control room, 40 tech core racks, and 10 venue racks, the system travels fully pre-wired and ready to go on arrival in Doha. The 8-foot-tall tech core racks were built on top of shock-mounted aeroplane pallets. To fit in an aeroplane cargo hold, Kevin Callahan and Douglas McGee, Consulting Engineer for system design, came up with the idea to have custom racks that fold in half while fully wired to fit under the cargo hold height restrictions. This first-of-its-kind flypack system enables FOX Sports to bypass intermodal transport by container ships and quickly move the system from event to event.

“This was an amazing example of vendors working together towards the goal of delivering a successful and ground-breaking project for a customer, on so many levels,” explained Peter Wharton, Chief Strategy Officer at TAG Video Systems. “TAG’s proven interoperability with all other equipment gave FOX Sports the freedom and agility to buy best-of-breed systems from multiple vendors versus a single vendor lock in, and the system’s ability to run on COTS servers allowed them to really avoid a lot of the supply chain issues that other vendors were experiencing, providing an additional measure of peace-of-mind.”

The TAG multiviewer and monitoring platform enables FOX Sports operators to see everything in the ST-2110 IP workflow as well as JPEG-XS and UHD, the formats FOX Sports are using for transmission between the IBC and studio, venues and FOX Sports operations centers in Tempe and Los Angeles. In addition, the entire network will be managed by a remote IT team located remotely. As technology advances and new formats emerge, the system provides built-in room for growth to allow FOX Sports to keep pace with rapid changes in the industry.

Using flypacks to transport live production systems has the potential to open doors to a whole new range of capabilities and reinvent how live production is done. The same systems can be transported from venue to venue, leading to an increase in familiarity and decrease in training time. Another advantage is the ability to add capabilities as workflows change, enhancing and improving the system.

Added Peter Wharton: “FOX Sports tapped TAG for many reasons, not the least being our constantly evolving upgrades and improvements. Since this system was built, we’ve launched numerous new features including our Bridge Technology that removes the complexity of routing the same stream to multiple locations with an ultra-efficient architecture. With a pure software solution on commodity hardware, TAG enables FOX to change and add to the system as their business needs evolve while saving capacity, resources and costs in the future, all without changing hardware.

“We worked seamlessly with Diversified, EVS and a number of other vendors to ensure that every one of FOX Sports’ financial and operational goals were met. They wanted a highly portable system that could quickly be transported on commercial planes intact and fully wired for easy deployment at the next event. This innovative system will leave Doha after the last match on December 18th and be up and running shortly thereafter for the Super Bowl in Glendale, Arizona in February.”