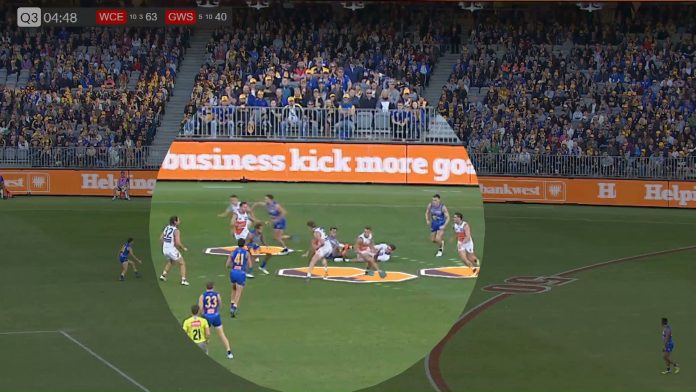 Marking their tenth season in the AFL it’s fair to say the GWS Giants have come a long in a relatively short time, amassing over 30,000 members, making the finals series four times and winning at least one game in each of their September campaigns. But when it comes to analysing the longest strides and the highest leaps there is one tool that has played an important part in the club’s journey and that is Ross Video’s PIERO.

“We came into the AFL ten years ago and the draft system enabled us to pick up some very talented young players,” comments Mitch Hanrahan, the club’s Head of Analytics. “My predecessor brought PIERO to the club in 2015 because he felt it would give us an edge. I’m not saying we felt we had something to prove against the more established clubs and teams, but we were trying to build a squad of players and a backroom team at the same time, and you need every advantage you can get your hands on. Ultimately, any club is judged on its results. Our players and our club have matured over the years, and we’ve had successes as well as a few bumps in the road, but PIERO has really helped with the development of our squad.”

The coaching teams at the GIANTS are broken down into three: forward line, backline and midfield.

“We hold regular meetings with the full squad and then smaller meetings with the individual coaches,” adds Hanrahan. “PIERO is used at every meeting to discuss the most important plays and tactics. There’s no doubt that the animations are extremely impactful and really help the coaches get their message across. Sometimes we even place virtual mottos and messages on to the grass just to make the players think about what we’re looking to achieve. It’s an amazing tool.

“In 2019 we reached the Grand Final and lost. That was tough, but we want to be playing at that level and competing for silverware every season. The 2020 and 2021 seasons have obviously been very different because of the pandemic and there’s been a lot of disruption, so I feel like I’ve already got one eye on 2022. We’ll use PIERO to analyse our pre-season games next March in addition to the league matches and we’ve also started to capture footage from our training sessions. The quest for improvement never ends!

“We’ve come a long way in the last decade and so has PIERO. I remember that calibration of the system used to take me a few minutes – it doesn’t help that not all Aussie Rules fields are exactly the same size – but it’s now down to a fraction of that. I’ve also seen a big step forward in the quality and variety of the animations, and we’re now using these to help market and promote the club. The media team love the animations because we can create ‘plays of the week’ or showreel content and that’s all very helpful from a commercial perspective. PIERO has been a great asset for us in terms of developing the players, building the expertise of our coaches and backroom team and helping us grow the club commercially. The relationship with Ross has been terrific and I’m convinced PIERO will be helping us back to a Grand Final very soon!”