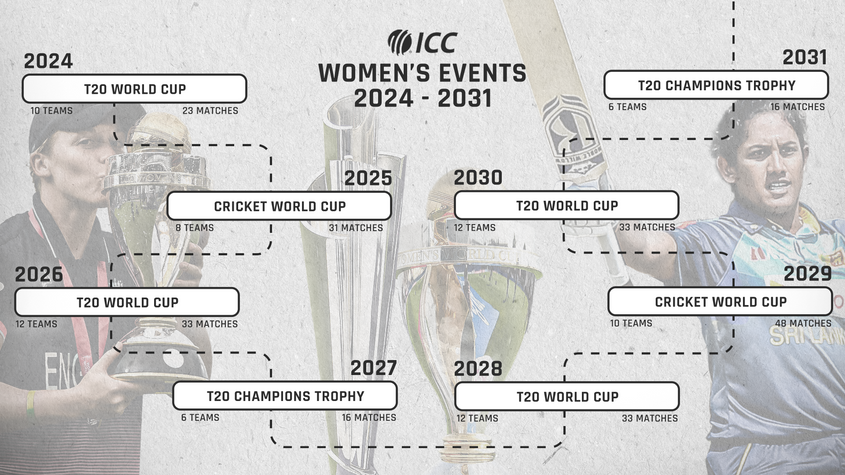 Cricket’s governing body, the ICC Board has confirmed the schedule of ICC events from 2024-2031 with both the ICC Men’s Cricket World Cup and ICC Men’s T20 World Cup to be expanded and a Men’s Champions Trophy to be re-introduced.

The ICC Board also approved the process for determining the hosts for all Men’s, Women’s and U19 events in the next cycle. The hosts for the Men’s events will be decided in September following a selection process that will get underway this month. The hosting process for Women’s and U19 events will commence in November and will be an opportunity to engage with a wider range of Members including first-time hosts.

The ICC Board has requested management focus its planning efforts for the ICC Men’s T20 World Cup 2021 on the event being staged in the UAE with the possibility of including another venue in the Middle East. A final decision on the host country will be taken later this month. The Board also confirmed that the BCCI will remain the hosts of the event regardless of where the event is played.

ICC Acting Chief Executive Geoff Allardice said: “Having the ICC event schedule confirmed through to 2031 is a significant step forward for cricket and will form the basis of our growth strategy for the next decade.

“The revised approach to selecting hosts for our events will give us much more flexibility to grow the game and engage new fans. There is a smaller pool of countries with the infrastructure needed to host our senior Men’s events which narrows the selection process. Additionally, many of our Members expressed interest in hosting Women’s and U19 events which gives us a great opportunity to stage events in established and emerging cricket nations.”

Meanwhile, the final of the ICC World Test Championship between India and New Zealand will be staged in a bio-secure environment at the Hampshire Bowl in Southampton from 18-22 June 2021.

The event has now been granted an exemption by the UK government as outlined in The Health Protection (Coronavirus, International Travel and Operator Liability) (England) Regulations 2021, released on 17 May 2021.

As per the bio-safety protocols established for the event, in line with UK government and Public Health England requirements, the Indian Men’s team will arrive in the UK on 3 June 2021 via a charter flight and carrying evidence of a negative PCR Test. Prior to travelling, the party will have spent 14 days in a bio-secure environment in India during which regular testing will have taken place. Upon landing, they will proceed directly to the on-site hotel at the Hampshire Bowl where they will be tested again before commencing a period of managed isolation.

Regular tests will be conducted during the period of isolation. Players’ activity will be allowed in a gradually increasing manner after each round of negative testing, moving from exercise in isolation to small group and then larger squad activity, whilst always remaining within the bio-secure venue.

The New Zealand team are already in the UK for a bilateral series against England and the team will transition from the ECB bio-secure environment into the World Test Championship Final bubble on 15 June and will be subject to regular testing prior to and post arrival in Southampton.