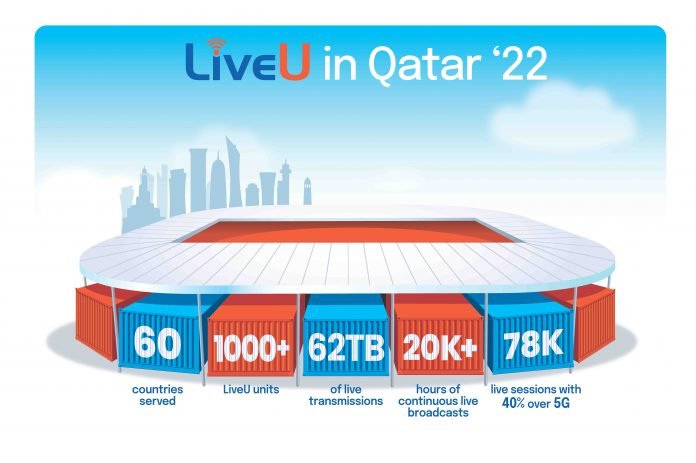 Live production solutions provider LiveU has released statistics from the world football tournament in Qatar, reflecting a massive increase in usage in its technology across the board. Over 1000 field units were used by broadcasters and sports organisations from 60 countries, compared to 485 units from 40 countries in 2018. The tournament saw a 160% increase in live sessions to 78,000 with 40% of them over 5G and a 73% increase in data usage, with 62TB of live transmissions. Over 20,000 hours of continuous live broadcasts from Qatar were recorded. Argentina and Spain led the charts with the most data, sessions, and broadcast hours.

Ronen Artman, VP Marketing, LiveU, said, “These numbers, even bigger than expected, are the result of the multi-year project planning and preparation that went into getting ready for the event. We saw the market need for increased usage and support, and prepared accordingly. LiveU units could be seen everywhere in Qatar, covering the matches themselves, players’ interviews, interaction with the fans, general atmosphere and technical aspects of the games. Feedback has been tremendous with customers leveraging the 5G/4G networks inside and around the stadiums for reliable 4K/HD quality coverage and using our remote production (REMI) workflows and IP distribution to reduce costs. Our events team played a critical role, providing on-ground 24/7 support and unlimited data plans from our service hub in Doha. The team also ensured the official CRA authorisation in the run-up to the event.”

Martin Pettit, Senior Cameraman, ITV Good Morning Britain, said, “I have been a cameraman doing live TV for the last 40 years covering a whole range of genres and broadcasting live from amazing locations. LiveU is the biggest and best technical revolution I have experienced. It has never been easier to make interesting and informative live broadcasts. LiveU allows choice of location, creativity and storytelling to take centre stage rather than be constrained by signal and cabling logistics. In Qatar, thanks to LiveU, I was able to broadcast from anywhere we chose. This not only included easy locations like the main Souk or Corniche, but also potentially difficult ones on the Persian Sea. All our broadcasts for ITV’s Good Morning Britain for the whole of our coverage of the World Cup went off without the slightest technical issue.”

Javier Aybar, CEO & Founder, Madco Broadcast Services, said, “Madco covered the Qatar tournament with LiveU equipment for the broadcasts of the matches of the Argentine National Team for Public Television in Argentina. During the first two weeks, Artear El Trece, one of the most important morning channels, carried out daily broadcasts from Doha, showing everything that was going on. From November 20 to December 18, we also broadcast live daily from the restaurant 29’s of the LaLiga in the Kempinski Residences & Suites, Doha. Our live coverage from Doha included the concert performed by Ciro y Los Persas, one of the most famous bands in Argentina, using multi-cam remote productions solution to our control in Madrid.”

Aybar added, “It is worth mentioning the support that we received at all times from LiveU Spain and the same with the people of LiveU in Doha. Without them we would not have been able to fulfill all the commitments we had as a producer.”