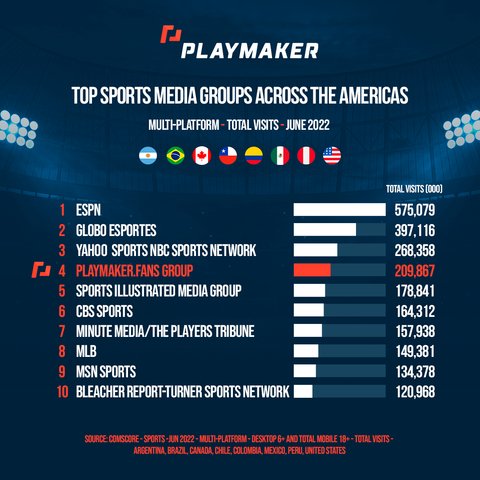 Playmaker last reported Comscore rankings for the period of December 2021, at which time it ranked as the sixth largest digital sports media company across the Americas after generating 180 million Comscore-tracked web visits in the month. Playmaker has since completed the migration of all of its acquired web properties and publishing brands, including Futbol Sites, Yardbarker, The Nation Network, The Sports Drop and World Soccer Talk to Bench, Playmaker’s in-house tech stack. This strategic undertaking, as well as strong organic growth, has resulted in increasing volumes of web traffic and enhanced monetisation capabilities across all web-based assets within the Playmaker ecosystem.

“To be ranked as the fourth largest digital sports media group across the Americas and a top-20 in North America is an incredible accomplishment that speaks to the premier brands and excellent teams that we have in place,” said Jordan Gnat, Playmaker CEO. “We have acquired and integrated 14 companies since April 2021, and not only are they delivering strong results, I am also continuously amazed by the constant collaboration and teamwork that is displayed across numerous languages and geographies daily. We have quickly established ourselves as leaders in the digital sports media space and I am very excited for the future.”