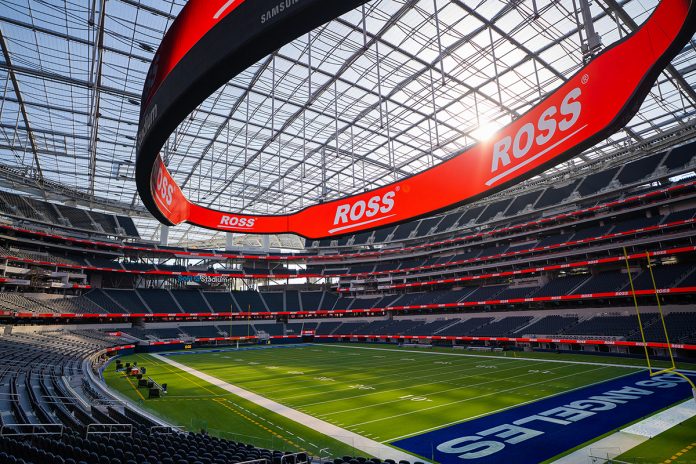 For the past five years, Van Wagner and Ross Video have been at the production helm of arguably the biggest sports and entertainment event on the planet. From the 2017 edition at NRG Stadium in Houston, Texas, to last year’s spectacle at Raymond James Stadium in Tampa Bay, Florida, both the Van Wagner and Ross teams have pushed the limits of live-in-stadium production for the NFL’s title game. The 2022 edition took place at the remarkable SoFi Stadium in Inglewood, California last night as the hometown Los Angeles Rams prevailed over the upstart Cincinnati Bengals team in what was another memorable championship game.

Having first opened its doors in the fall of 2020, SoFi Stadium has been described as the crown jewel of the entertainment capital of the world. Offering an unforgettable video experience for spectators, the venue features a network of LED panels on the exterior of the roof to project images visible by flights into and out of nearby LAX Airport. Once inside the venue, the centerpiece is the 360-degree infinity board, which spans 120 yards and contains nearly 80 million pixels.

As SoFi is a Ross Video-powered venue, XPression Tessera engines were responsible for driving content pixel-accurately across all LED displays within the stadium on Sunday. Inside the production control room, two Ultrix Acuity switchers offered game-day operators a hyperconverged production solution that merges switching, routing, multi-viewing, and signal processing into a single platform.

PIERO Live was added for sports graphics analysis as well as virtual Down & Distance lines, and the new integration with the Mira replay system allowed for unmatched speed and total control of Piero replay content.

On top of that, the Voyager graphics rendering solution, powered by the Unreal Engine from Epic Games, delivered augmented reality (AR) graphics for the event. Along with ACID cameras, Furio robotic camera heads, and the Lucid Studio control system, Voyager highlighted scoring drives and other Next Gen Stats content to keep fans engaged and entertained.

Tying together the entire production for a Unified Venue Solution was DashBoard. Ross Video’s venue control software was used to trigger unforgettable take-over elements, providing a truly immersive experience for the more than 70,000 fans in attendance.

“While we’ve been supporting the production of the NFL’s biggest game for three decades, the partnership that we have formed with Ross over the past five years has been special. SoFi stadium was built to host the biggest games on the planet and in our estimation, last night’s show was befitting of the venue” notes Bob Becker, Van Wagner’s Executive Vice President.

Becker adds, “Each year, we try to show the crowd something that they’ve never seen before, and with the infinity screen at the center of this year’s show, we felt that we were able to deliver a world-class fan experience.”

Kevin Cottam, Vice President of Sports & Live Events at Ross, was thrilled to be working with Van Wagner and the NFL again on this marquee event. “We’re very proud of our work with Van Wagner and the NFL over the years and look forward to continuing to support them on some of the world’s most prestigious sporting events. Last night’s game was another example of how the partnership has grown over the years and it was at a venue that we have become very familiar with.”