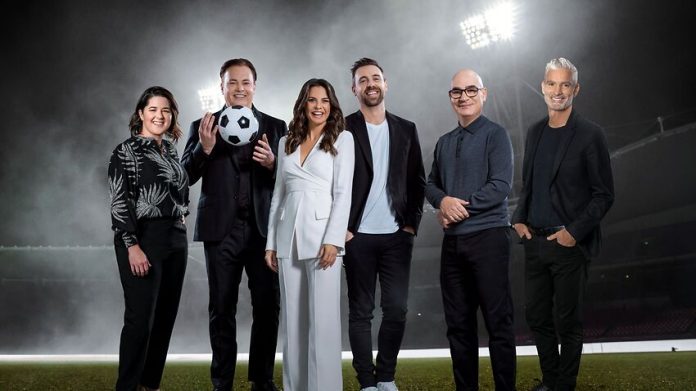 The countdown is on to the world’s biggest sporting event – the FIFA World Cup 2022 – with SBS giving all Australians a front row seat to the live action.

As the official broadcaster of the tournament, SBS audiences can catch all the action from Qatar and experience the world exclusive commentary from the iconic international ‘voice of football’, Martin Tyler, who will join respected football presenters Richard Bayliss and Niav Owens as part of SBS’s exclusive broadcast.

Richard and Niav will host every live match from SBS’s Sydney studios and will also be joined by a number of special guests to share a range of perspectives on each day’s events. Much-loved Socceroos goalkeeper and Premier League champion, Mark Bosnich, and former Socceroos captain, seasoned broadcaster, and 2022 Australian Father of the Year, Craig Foster AM, will share their trusted analysis and insights. Former Matilda and Head of Women’s Football at Football Australia, Sarah Walsh, will also be a guest analyst in the studio along with an impressive guest line-up of former football internationals to be unveiled. Exclusive pitch-side tournament coverage and the best access on the ground will come from David Basheer and Matt Connellan.

The SBS broadcast will feature live commentary from inside the stadiums, with David Basheer calling the Socceroos matches, and Martin Tyler will be front and centre for key matches including the opening match and the final.

SBS Director of Sport Ken Shipp said: “FIFA World Cup 2022 is the event of a generation. SBS has assembled a world-class line up of experts and Australian football royalty to provide their extraordinary insights and knowledge to our premium coverage of the FIFA World Cup. We are thrilled to again deliver our award-winning and multilingual coverage live and free to all Australians. No one does football like SBS, and from pitch side to inside the locker rooms, we’ll bring our audiences all the best action and atmosphere from this unique World Cup.”

SBS will broadcast all 64 matches live and free on television and live streaming via SBS On Demand. Many matches are at favourable times for Aussie fans, with seven matches in the group stage set to kick off during prime time at 9pm (AEDT) and 20 matches to kick off at 6am (AEDT).

SBS’s coverage will begin with the Opening Ceremony followed by the first match between Qatar and Ecuador on November 21, while Australia’s first match is against France with coverage starting from 5am (AEDT) on November 23 on both SBS and SBS On Demand.

SBS Radio will also broadcast all 64 matches of the FIFA World Cup Qatar 2022, live and free via DAB digital radio, mobile and online. Matches will be broadcast in up to four languages simultaneously; English, Arabic and in languages of competing teams.