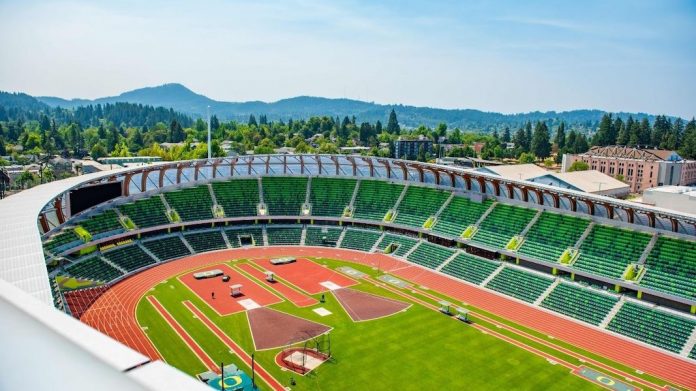 The World Athletics Championships Oregon22 are taking place in the USA this year for the first time ever, after being postponed last year because of the Covid pandemic.

They will receive comprehensive coverage from over 40 broadcasters in Europe and Africa, with a combined total of more than 2,100 hours of coverage planned, of which more than 1,800 hours will be live (an average of more than 60 hours per broadcaster, based on information received from 34 broadcasters so far).

Over 20 EBU Members will have venue facilities on-site, while Eurovision Sport will continue to support Ukrainian Member UA:PBC, to ensure that it is able to broadcast the championships despite the effects of the war.

EBU Members that have acquired rights to broadcast the event so far include:

World Athletics President Sebastian Coe said: “We’re delighted at the extensive broadcast commitment made by the EBU Members to ensure that our European and African fans will enjoy widespread live coverage of our signature world championships. This is further confirmation of the enduring appeal of athletics, not only across Europe, but around the world. We’re all eagerly anticipating the spectacle of the world’s best athletes going head-to-head for global titles, especially after the exceptional quality of competition at last year’s Tokyo Olympic Games.”

Andreas Aristodemou, Eurovision Sport’s Head of Summer Sports Rights, added: “This year’s World Athletics Championships in Oregon have been much anticipated and this is very much demonstrated in the broadcast plans we received so far. Despite the unfavourable time zone, audiences around Europe and Africa will enjoy blanket coverage from the action at Hayward Field which promises to be unforgettable.”

Last year the EBU extended its agreement with World Athletics to cover European and African rights on all existing and non-existing platforms, via all distribution modes (albeit the vast majority of coverage will be free-to-air), as well as non-exclusive radio rights, from 2024 to 2029.

The renewal marked a 40-year partnership between World Athletics and the EBU.