The eight-part series will be produced by Sydney-based Brouhaha Entertainment and screen on Netflix.

Premier Annastacia Palaszczuk said there is no better place for the story of Brisbane boy Eli Bell to be filmed than right here in Brisbane.

“This uniquely Brisbane production will also boost our local screen industry by injecting around $33 million into the Queensland economy and creating approximately 185 jobs for cast and crew, and an estimated 2500 extras.”

Screen Queensland CEO Kylie Munnich said the series shines a spotlight on Brisbane as a sought-after screen location as well as one of the state’s prominent filmmaking hubs.

“Brisbane has earned its reputation as a one-stop-shop for production, including film-friendly locations, experienced local crew, renowned post-production facilities and a fantastic studio facility in Screen Queensland Studios,” said Munnich.

“I thank Brouhaha Entertainment, Chapter One, Anonymous Content and Netflix for choosing the ‘river city’ to film Boy Swallows Universe, and look forward to seeing the words of this blockbuster novel come to life on screen featuring some of this city’s quintessential suburban locations.”

Boy Swallows Universe follows working-class Brisbane teenager Eli Bell in a whirlwind story about drug addiction, ex-cons, poverty, violence and the discovery of hope through the power of love.

Producer Andrew Mason said he is delighted to be bringing the production to Queensland.

“We’re thrilled to be producing this beloved story here in Queensland, with the very best of facilities, locations and world-class crew,” Mr Mason said. 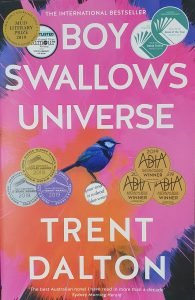 Author of the book and Executive Producer Trent Dalton said following on from a critically-acclaimed stage adaptation in 2021 by Queensland Theatre as part of Brisbane Festival, it was a logical next step to take Boy Swallows Universe to the screen, using Brisbane locations and local crew.

“It just makes sense. This adaptation to the screen couldn’t happen anywhere else, and I am proud to be part of this exciting adventure on my home turf,” said Mr Dalton.

“Boy Swallows Universe is my very deep and personal love letter to my city of Brisbane. I’m so incredibly honoured to know the Queensland Government and Screen Queensland is helping us mail that letter around the world.”

Que Minh Luu, Director of Content, Netflix ANZ, said, “Brisbane is such a key character in Boy Swallows Universe that Queensland was always the first-choice location for us to bring to life on screen the evocative and uniquely Australian universe that Trent created.”

Boy Swallows Universe was first published in 2018 by Harper Collins and holds the record as the fastest-selling Australia debut novel ever.

Boy Swallows Universe was secured via Screen Queensland’s Production Attraction Strategy, which has drawn interstate and international production into Queensland since 2015.